"What is negotiation but the accumulation of small lies leading to advantage?" -- Felix Dennis

A few might be. Shutdown? Time off with back pay? That has been the history of such occurrences. A lot on the table. Though equity index futures are lower, this whole thing has been taken in stride. For now. Suddenly, though, a government shutdown that not a soul feared stretches into its third morning. This is either the "Schumer Shutdown" or the "Trump Shutdown", depending on what brand of binoculars you use. You do not need my help to make up your mind on this. I have my opinions, and so do you.

The mere prospect of the shutdown did add some juice to the selloff experienced late Friday for the longer end of the U.S. Treasury yield curve, whether we admit this or not. My thought on this is to watch the 10-year as the negotiations in the U.S. Senate extend themselves. It is only once the government actually re-opens that we will find out if that particular product truly belongs above 2.63%. In the meantime, the spread between the two-year and that 10-year will be my focus. For a moment, this spread actually saw the light of day above 60 basis points. For a moment.

Oh, earnings. Yeah, those. Netflix (NFLX) tonight, and enough aerospace and tech to fill out the week. That week, by the way, will culminate with fourth-quarter GDP and December durable goods orders. Before we get there, though, both the Bank of Japan, and the European Central Bank will step to the plate. Will both of them lean toward tightening monetary conditions? Well, they both better at least say something intelligent.

We talk often in this space about discipline, in particular the discipline of diversification. Many of us proudly feel that we are broadly diversified, yet as far as equities are concerned, we hold only U.S. stocks in our portfolios. I have found over the years that when I feel the need to increase exposure to a certain part of the world, ETFs often accomplish this mission for me. I don't really like to use ETFs all that much, certainly not the leveraged or inverse varieties, but I will use them in this way, as well as an easy way to increase sector exposure, in a "wax on, wax off" fashion, rather than to buy or sell a set of securities, running up my commission costs.

India on The Rise

To be honest, I really am barely exposed to India. I bet that's true for many of us. Guess why we need to be. Many economists believe that India passed the UK and France last quarter to become the fifth largest economy on the planet. We'll know for sure by the end of February. There are also several reports being passed around that show India passing China in 2018 in terms of the pace of GDP expansion.

While we were all pleasantly surprised to see Chinese growth report in at 6.9% for 2017, India is targeting a pace around 7.5% for the coming year, with whispers as high as 8%. As the annual World Economic Forum clambake kicks off in Davos this week, the early focus will fall upon Indian Prime Minister Narendra Modi. As Chinese President Xi Jinping was seen as the darling of Davos in 2017, Modi will try to assume that role as he takes his "New India" campaign center stage -- a stage that only last week, he was thought to have to share with U.S. President Donald Trump. However, with the US government in shutdown mode, this is now less likely.

Looking at potential investments that might increase one's exposure to such a fast-growing economy, the retail trader would probably be pleased to know that there are three large ETFs that pretty much accomplish this. There are also several Indian companies listed at either the New York Stock Exchange or Nasdaq. You do not have to go to the trouble of opening a specialized trading account.

First, the ETFs. Easily the largest of these is the iShares India ETF (INDA) . This is also the most economical for you, the investor, at it charges fees of 68 basis points. Financials comprise the largest weighting in all three of these funds, with information technology also heavily weighted. This particular fund, as of Friday's close, was up 3.77% year to date after a 36% run in 2017. In comparison, the S&P 500 closed Friday up 5.1% and the S&P BSE Sensex Index (Indian Benchmark) closed up 4.3%. That 4.3% has been stretched to over 5% in Monday trade. The other two ETFs to take a look at would be Wisdom Tree India Earnings Fund (EPI) , and iShares India 50 ETF (INDY) . The three funds have all performed similarly in 2018 after a strong 2017. The difference other than fees, largely lie in the capitalization of the equities held.

As for equities with a home away from home in the U.S., there are several. I am sure that most of you will think of Tata Motors (TTM) immediately. This is India's largest automobile manufacturer, while Jaguar Land Rover is the U.K.'s. Jaguar Land Rover is a Tata subsidiary. In all, the firm sells its wares in 50 nations. I am not crazy about this stock, though. The shares have traded sideways to lower over the past year, and I am certainly not in love with the firm's posting of current ratios that swim below a full point. There are also a couple of banks, HDFC (HDB) and ICICI (IBN) , which have both spiked higher in 2018. Let's not forget that inflation is a bigger issue in India than it is here -- so obviously, banking is different. As far as I can tell, these both seem a little pricey based on forward-looking valuation, and I am not crazy about chasing either of these, although IBN is cheap enough to speculate on.

I find something else interesting. I assume that you've heard of Infosys Limited (INFY) ? A $39 billion firm now trading above $18? This Bangalore-based firm provides business information services including application development, infrastructure management, engineering services, systems integration, and the list does go on. Basically, this is a technology business solutions firm. The share price has run of late, so you may not want to chase this. There is a 2.2% dividend yield (paid semi-annually). The firm clearly has its debt situation under control, which I always look at, and always like. The firm scores well on both sales and net income growth, and sports attractive margins. For my own account, this is one that I am flat, but through researching this morning's note have become more interested in. Let's see what the chart tells us.

Chart of the Day: Infosys

This chart gets a little too busy for my liking, but out of necessity. I hope you'll bear with me. Going into Modi's appearance at Davos, one can easily see that the short-term indicators such as the daily moving average convergence divergence (MACD) and recent Relative Strength have gone significantly higher. That would tend to have me, when running my own money, wait a bit, though clearly you might see a furthering of this pop in the coming days.

You can see that the green Pitchfork had run in place since mid-August, using the central trend line as a pivot. Then the stock broke north. In order to apply a new Pitchfork (blue) that made any sense, I had to omit those one-day selloffs and declare them aberrations. Does that invalidate the model? It might. The answer to that question will require hindsight at a later date. What I find interesting here is that the blue Pitchfork and the red Fibonacci levels both point to $16 as an area of significant support. That's a 12% correction from here. I understand that. Know what? The stock has indeed traded there this year. 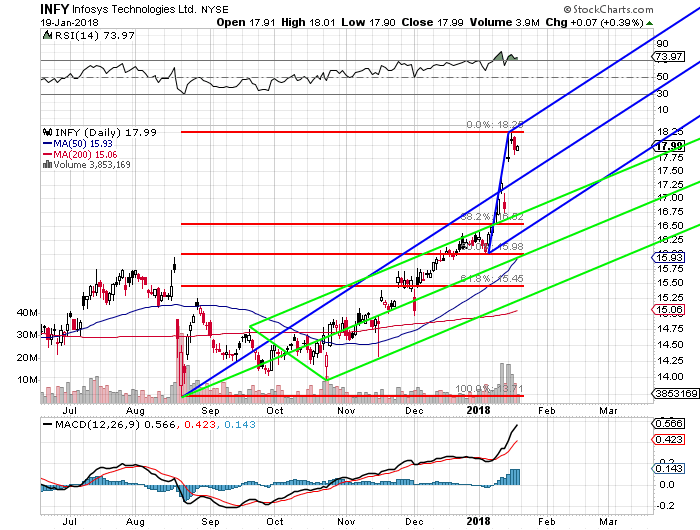 The recent move is the result of a pricing agreement with the IRS, as well as statements made by CEO Salil Parekh that the firm will update its priorities by April. I am in no rush. I can wait for the chart to develop a little, so that my decision might be a little more educated. That said, you know where my interest ramps up dramatically. Until then, maybe I take the ETF route.

Get an email alert each time I write an article for Real Money. Click the "+Follow" next to my byline to this article.
TAGS: Investing | U.S. Equity | Technology | ETFs | Funds | Emerging Markets | Markets | Economy | How-to | Politics | Risk Management | Stocks

Don't Get Caught in NetApp

Let's check the charts and indicators before earnings for NTAP land later on Tuesday.

CrowdStrike Ahead of Earnings: Strike Now or Avoid the Crowd?

Let's check the charts on this prominent cybersecurity company.