CSX Corp. (CSX) and Norfolk Southern (NSC) are two railroad stocks that are steaming ahead. Let's see where the tracks are pointed.

In this three-year weekly chart of CSX, above, we can see a strong uptrend over the past year. Prices are above the rising 40-week moving average line.

The weekly On-Balance-Volume (OBV) line has been moving higher the past year, signaling aggressive buying and accumulation. The trend-following Moving Average Convergence Divergence (MACD) oscillator has been above the zero line since early July and is still bullish. 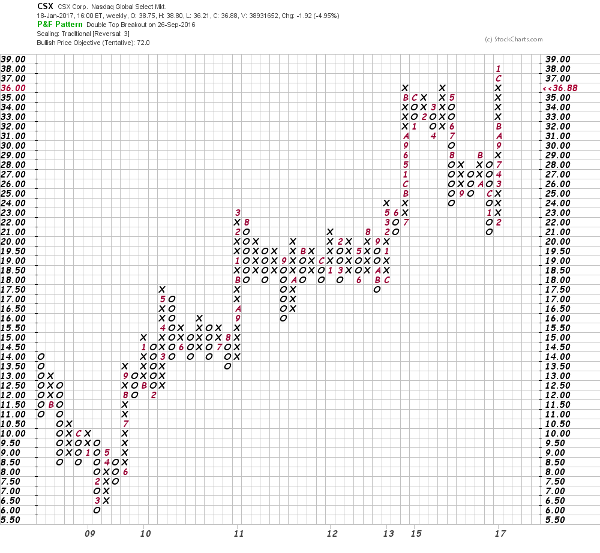 This longer-term Point and Figure chart of CSX, above, shows an orderly rally from the 2009 lows. We see rallies followed by consolidations followed by new rallies and new consolidations. The recent breakout above $36 gives us a potential long-term price target for CSX of $72. All aboard!

This three-year weekly chart of NSC, above, is also pretty bullish. Prices are above the rising 40-week moving average line with only a little old resistance from 2014 above the market. The OBV line could be stronger, but the MACD oscillator is clearly bullish. 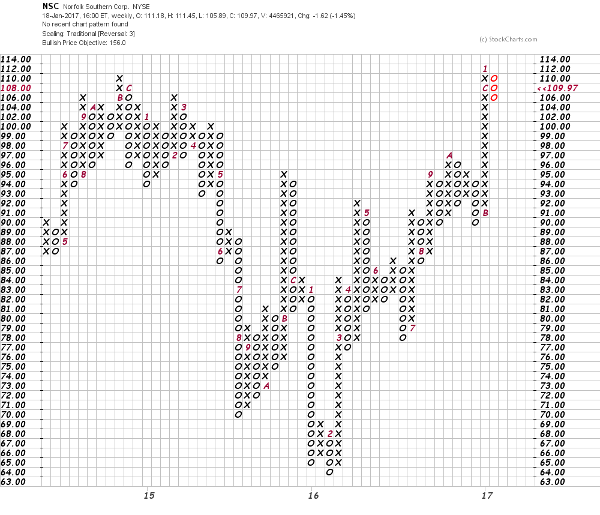 This Point and Figure chart of NSC, above, shows a breakout above $110 and a possible longer-term price objective of $156. Impressive.

Get an email alert each time I write an article for Real Money. Click the "+Follow" next to my byline to this article.
TAGS: Investing | U.S. Equity | Transportation | Markets | Mergers and Acquisitions | Stocks

The EV market is nowhere near saturation yet. I believe we'll have some additional expansion before we begin to see takeovers.