By BRUCE KAMICH Jan 19, 2017 | 02:03 PM EST
Stocks quotes in this article: ASML
ASML Holding ( ASML) has soared northward since early December. Prices are very extended on the upside and have begun correcting. How far down shares will do and how long this correction will last remains to be seen, but at the end of the day we want to find a level or area where we feel more comfortable with the long side.

In this daily chart of ASML, below, we can see the price history going back to mid-January 2016. ASML has rallies followed by multi-month corrections. ASML made a bigger rally from December than the rally from its February low or from its June/July low. The first correction on ASML lasted three months and the second one lasted four months. Prices are above the rising 50-day moving average line and above the rising 200-day moving average line.

The On-Balance-Volume (OBV) line, above, has risen from early July and confirms the uptrend. In the bottom panel is the momentum study which shows equal highs in December and January as prices make higher highs. This bearish divergence is likely to "play out" further in the days and weeks ahead.

In this three-year weekly chart of ASML, above, shows what some chartists may call a large cup-and-handle pattern or a large saucer bottom. Prices broke out of this large pattern on the upside when $110 was broken on the upside recently. Prices are above the rising 40-week moving average line. Look at the weekly OBV line -- buyers of ASML have been more aggressive since the fourth quarter of 2015 and this suggests a significant period of accumulation. The weekly Moving Average Convergence Divergence (MACD) oscillator has been in a bullish mode since March. 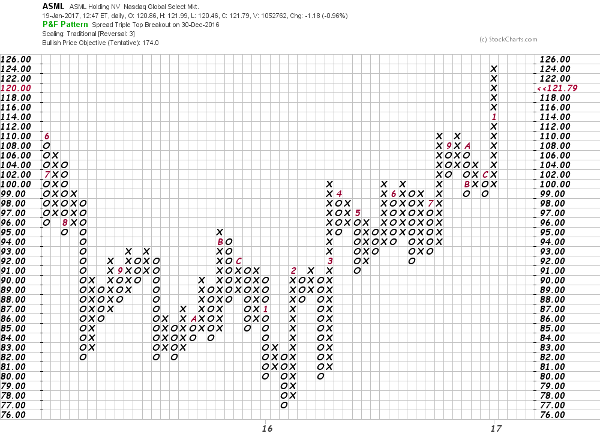 In this point-and-figure chart of ASML, above, we can see the rapid rally from the breakout of a very wide base pattern. This chart shows a potential upside target of $174.
Bottom line: ASML broke out of a major bullish pattern and could rally to $174, maybe higher, but a price objective needs to be balanced against risk. ASML needs to correct the steep advance before the rally resumes. Not trying to dodge the tough question, but I want to see how this anticipated correction unfolds before committing. When the correction has run its course an appropriate stop-loss can be suggested.
Get an email alert each time I write an article for Real Money. Click the "+Follow" next to my byline to this article.
TAGS: Investing | U.S. Equity | Technology | Stocks