The quiet of night had broken. Zero dark thirty. Their forces had already consolidated. One cannon barked. Then more. Many more. The date was April 12, 1861. Confederate batteries under the command of Brigadier General P.G.T. Beauregard would not quiet for another 34 hours. Fort Sumter would be surrendered and evacuated by the United Sates Army. Humiliating. Major Robert Anderson was forced to lower the U.S. flag on the 14th. It would take four years to the day, but both Anderson (now a national hero), and that 33-star flag would return to Fort Sumter. In triumph.

It would not take the Dow Jones Industrials four years to recapture the 26,000 level. It would not take the S&P 500 four years to retake the 2800 level. One day after a reversal that nearly all market participants took notice of, on a day after nearly all traders and investors went home with at least some doubt in their minds, equity markets roared. In Wednesday's Recon, we went over how two significant models displayed support precisely where the S&P 500 index closed on Tuesday. I did expect to see support at the open. I would be lying if I pretended that I expected the incredibly broad move higher that we did see.

Tech took off, led by the semiconductors. Thank ASML Holding (ASML) for that. Healthcare, energy, even the financials that got off to a cranky start ended up having nice days. I would prefer to see discretionary names outrun staples, but I won't cry over it. Market breadth, or should I say portfolio breadth, carried the day, at least for the kid who's still wearing some General Electric GE. More on that in a bit.

U.S. equities are indeed robust, but volatility has now shown its ugly face. There will be more. Remember the carnival game "Whack a Mole"? Ready to play? You and I are not doomed. Not by a long shot, but we are going to have to work harder from here on out. Everyone thinks that they're a trader, in a bull market.

Roughly one third of the S&P 500 stocks are now trading at the very top of their 52-week ranges. Everyone and their uncle seems to be trading above their 50-day Simple Moving Averages. Easy? Let's not kid ourselves. It has been. At some point, though, it stands to reason that as we round out the rest of what will obviously be another good earnings season, this boost to expectations from tax reform is a one-time thing. Not to belittle it. Corporate tax reform is indeed the greatest thing since sliced bread. It's just that after this quarter, it becomes part of the furniture.

No more profits on impulse purchases. No more "Uhm, I took a shot here", and seeing it work out. After nine years of throwing money at a wall and seeing it stick, often with outsized gains, the time has come to re-acquaint yourselves with debt levels, short ratios, current and quick ratios, profit margins and cash flows. Technicals will always matter. That's how you trade. That's tactical. However, investors make sound decisions based on fundamentals. Fundamentals are strategic. Poor technicals make for lousy performance short to medium term. Poor fundamentals will make for a lousy year, and even a short career. You'll need to be adept at both. For bull market traders, it might be 6pm. For stock pickers, it's 4:30 in the morning. We're just getting started, gang.

Remember how messy your children got when they first discovered finger painting? Maybe it was kindergarten. Maybe it was pre-school. As the Apple (AAPL) news was relayed by the media on Thursday, it seemed just as messy. Did anyone really know what the company was trying to tell us? I won't complain. The mess created by this news saved me some money. In my monthly piece for January, I told you that I would take some more off at $176, and that I had moved my panic point up to $167.

Funny thing. The stock -- which is a holding in the Action Alerts PLUS charity portfolio that Jim Cramer co-manages -- opened well above that, sold off, and then rallied again to close high, as the tide of a broader market carried the name to victory. My target price acted as support. Hmm. Awesome.

What now? Well, for the firm, it appears that it does plan to build a second headquarters, but that's not all. Heck, the number of U.S. corporations announcing some kind of positive investment, or increase in employee compensation, must now be well over 100, since tax reform passed. (That's a guess, before you attack me, but it is broad.). Apple has now pledged to expand its U.S. advanced manufacturing fund from $1.0 billion to $5.0 billion. The firm also plans to have to make a $38 billion one-time tax payment. This might be on some kind of mix between overseas profits and repatriated funds. One cannot expect that the $250 billion in cash held overseas to all come home.

Perhaps the best part of the news was the fact that Apple expects everything that it is doing, between construction, retail, and economic multiplication, to have a positive impact on the economy of $350 billion over five years and to create up to 20,000 jobs. As a trader, my panic point now moves from $167 up to $176. I'll sell some if that level cracks to the downside. New target? Well, I need something to write next week, don't I?

Sometimes, You're the Windshield...

... And sometimes, you're the bug. You guys long General Electric (GE) ? Really? No way. Me too. Okay, gang, just what the heck are we going to do about that? It's never good when you think a company has made permanent positive changes based on a top-down revue of the entire firm that takes months. It cut the dividend. You understand. Management talk about cash flow. You understand. You sell puts at attractive strike prices. You're the bug. Still you understand. Even with an apparently underfunded pension plan, you understood.

Then, the firm announces a $6.2 billion after-tax fourth-quarter charge related to a legacy business that investors thought to be winding down. The finance unit will also have to pay $15 billion over seven years in order to replenish reserves. This news seemed to take the firm's leadership by surprise. One must ask: "Just what else don't they know?" I really can't complain. My cost basis is below $20, but regaining that level might be akin to a 25-mile forced march with a heavy pack and new boots, from where we stand now.

The incredible thing is that the break-up chatter did not even help the name. In fact, the mention of breaking off profitable pieces such as aviation and health care smack of desperation. Power, considered the soul of General Electric, likely needs to be restructured, but is still a sizable revenue contributor. My guess is that John Flannery is an earnest guy. I also think that the kids from Trian Fund Management (Peltz and Garden) are the right kind of influence needed at GE right now. Downward risk? Oh yeah, there surely is some of that. Nobody agrees what the sum of the parts might be due to how opaque the firm's numbers have been. Everyone does agree that breaking up is, well, .... hard to do.

I'm in it, but no dollar cost averaging for me. Could be like throwing good money after bad. I will, however, continue to lower my cost basis through the sale of calls covered by my long, and yes, even puts. In both cases, this is only if the premium is actually there. I'm not writing anything for a song and a dance.

Chart of the Day: GE

For the purposes of relevance, I only charted back to just before General Electric's GE recent dividend cut. Relative Strength and money flow both scream for investors to run for the hills. So does the sudden turn for the worse on our moving average convergence divergence (MACD), though two of the three exponential moving averages (EMAs) remain in positive territory. That'll last for an hour or two. Don't even look at the Pitchfork, unless you're flat the name and looking for entry.

In that case, the trend is saying you have a month, and can get them below $15. Due to the fact that this slope was caused by news events, and one hopes that the news is out, I do not think that the trend is meaningful. Then again, I'm openly biased. The name tested the current level as support for the third time in two months on the closing bell. What does that mean?

Honestly, the December lows were the obvious work of tax selling, so I am not sure. I will tell you this: If the name does bounce from here, the spot does become something more than it was, at least to the algos. The Fibonacci levels tell us that on positive news, levels just above $20 do become realistic. 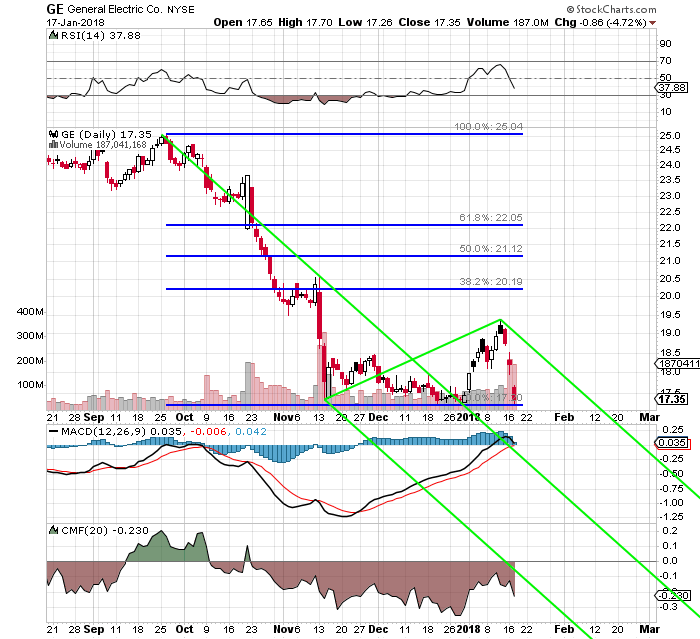 I understand that this stock is painful, especially if you counted on the name as an income provider. My thought is to hang on at least until spring, and see what the firm comes up with. In other words, let's see what the gang at Trian comes up with. Most importantly, if this name is causing you stress, then lighten the position at least to a point where your quality of life is not impacted by the daily fluctuation of market pricing. Onward.

Get an email alert each time I write an article for Real Money. Click the "+Follow" next to my byline to this article.
TAGS: Investing | U.S. Equity | Technology | Industrials | Markets | How-to | Options | Politics | Risk Management | Stocks