The December CPI was up 0.3%, higher than expected. This brings the year-over-year increase to 2.3%, the highest in five years. See chart below. 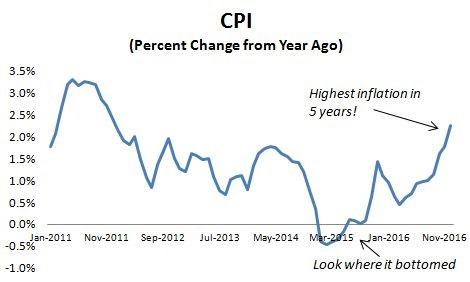 Core CPI (less food and energy) was up 0.2% and rising at 2.2% year-over-year; the fastest in three months.

Look closely at the chart above. You will see that inflation really bottomed right around the time of that first Fed rate hike in December 2015. I've been talking a lot about this lately, but it's a point that I cannot repeat too often. That's because the mainstream view, the orthodoxy if you will, is that rate hikes quash inflation, yet you can see plainly see that it has been just the opposite.

Stocks started off lower this morning on the news but have since recovered on some positive earnings from Goldman Sachs (GS) and Citigroup (C)  , a holding in the Action Alerts PLUS portfolio. I don't expect the rally to continue. What inflation does is discount future earnings. They are worth less. That's what inflation is, right? Your money's worth less in the future. Stock prices thus trend lower. This process is called discounting. It's the opposite of what happens when inflation falls: Earnings are worth more in the future. Stock multiples rise.

There's a story out that may give a clue as to Donald Trump's economic policies once he takes office. I don't like to talk about what Trump might or might not do because we don't know yet. However, I need to mention this because investors have responded to the "stimulus" talk almost euphorically, and I am skeptical if that's completely justified.

Trump is unusual in the sense that he says things then often does the opposite. He spoke in broad progressive terms during the campaign. "I'm going to help the middle class. I am going to do a $1 trillion infrastructure spending program," etc. Then he loads his administration with fiscal hawks. Go figure.

In the end he may not listen to them, just like he apparently isn't listening to anti-Russia hardliners like Rep. Mike Pompeo, R-Kan., (Trump's nominee to head the CIA) and Gen. James Mattis (his nominee to be secretary of defense). Let's hope so, otherwise, if he does go along with what he seems to be proposing with these spending cuts then we are definitely in recession, perhaps a long one.

Get an email alert each time I write an article for Real Money. Click the "+Follow" next to my byline to this article.
TAGS: Financial Services | Investing | Economic Data | Economy | Politics