Eli Lilly & Co. (LLY) was reviewed in early October and I commented that "Yes, LLY is close to an important breakout and maybe I am fighting the tape a little, but I do not get the same bullish readings that I have gotten from other charts this past year. Hard to really quantify. Stay tuned."

I said to stay tuned and Action Alert PLUS holding Lilly made a peak in early October and declined modestly to the middle of November. Prices have improved the past eight weeks and now I want to turn up the volume.

In this daily bar chart of LLY, below, we can see that LLY has probed the area above $88 a number of times. So far, each thrust up above $88 has been rejected. Prices looked like they were going to rally to challenge $88 again but a sharp reversal yesterday derailed the advance. With no follow-through selling today we may be looking at a short-term "whipsaw". Prices are above the rising 50-day moving average line and the rising 200-day line.

The daily On-Balance-Volume (OBV) has been making higher lows since May and is very close to making a new high for the move up. The Moving Average Convergence Divergence (MACD) oscillator has turned up from above the zero line for a fresh outright go long signal.

In this weekly bar chart of LLY, below, we can see that prices are above the still rising 40-week moving average line. We noted that LLY has had a problem holding strength above $88 in recent months but this longer-term chart shows that the $88+ area was a problem back in 2015. The weekly OBV line has been positive since late 2016 and has moved up and down with the price action last year. The OBV line is close to a new high which would confirm the strength of the advance. The weekly MACD oscillator is above the zero line and could turn up (or down) with the near-term price action.

In this Point and Figure chart of LLY, below, we can see a bullish pattern of higher lows and higher highs. A rally to $89.96 on this chart will be a breakout and could open the way to a rally to $104.14. A decline to $83.91 would be a short-term negative. 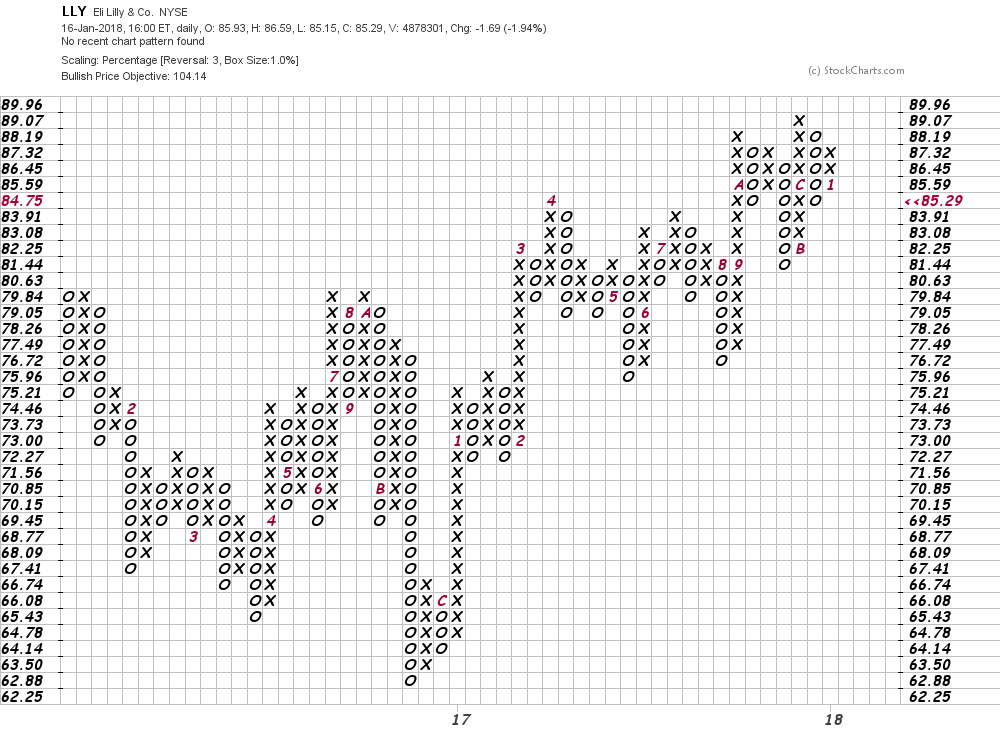 Bottom line: The long-term picture of LLY is bullish and I want to be a buyer. Investors could go long at current levels risking a close below $82 and traders should wait for a close above $88 before going long. The $100-$104 area is my price target.