Randgold Resources (GOLD) corrected down into its base pattern over the past few months. Recent strength in the price of gold, weakness in the U.S. dollar and improved technical signals on GOLD suggest that GOLD and other precious metal miners can rally further.

You don't have to be a confirmed gold bug to participate. Let's look closer at the indicators to discern their message.

In this one-year daily chart of GOLD, below, we can see both a five-to-six month correction and a recent, two-month, upside reversal. In August, GOLD declined below the rising, 50-day moving average line. Prices stayed below the 50-day average until the end of December, and rallies in September and November stopped at the underside of the 50-day average.

The On-Balance-Volume (OBV) line moved modestly lower from August until December. This decline tells us there was an increase in selling, but it was not that heavy. With the OBV moving up in the past month, we are seeing new accumulation. A bullish divergence can be seen in October, November and December.

Prices made lower lows during these months, but momentum made higher lows, telling us that the pace of decline slowed. The downtrend from the July peak has been broken, so now the question is how long and how high this new up move may carry.

The signals on this weekly chart of GOLD, above, are mixed. Prices broke support around $85 but found next support around $70 in the top end of a $70-$55 support zone. Prices are below the declining 40-week moving average line. The weekly OBV line looks like it has moved up in the past month to break the previous downtrend. The Moving Average Convergence Divergence (MACD) is crossing to a cover shorts buy signal. 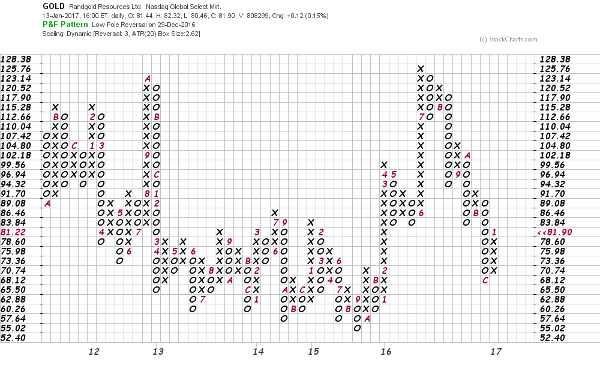 This long-term Point and Figure chart of GOLD, above, shows the 2013-2016 base pattern, the 2016 rally and pullback. The latest column on this chart is a column of Xs or a bullish move to the upside. Aggressive traders could go long GOLD using a sell stop at $68.12.

Get an email alert each time I write an article for Real Money. Click the "+Follow" next to my byline to this article.
TAGS: Investing | U.S. Equity | Basic Materials | Gold | Markets | Stocks