"A well-adjusted person is one who makes the same mistake twice without getting nervous." ... Alexander Hamilton

Huge day. Really. All week long, the industry has been pointing to this Friday morning. The big banks are kicking off fourth-quarter earnings season in earnest. By the time you read this, the likes of JP Morgan (JPM) -- which is a holding in Action Alerts PLUS, which Jim Cramer co-manages as a charitable trust -- Wells Fargo (WFC) and PNC Financial (PNC) will dominate the headlines. At that point, the macro will take over. Every month, usually on the first Friday, the Bureau of Labor Statistics releases its in-depth snapshot of the nation's employment situation. That's largely considered to be the biggest day of any month for economists. If there is a close second, every month, it is the day when the same BLS prints its data for consumer price inflation (CPI) for the previous month, simultaneously along with the Census Bureau's retail sales data.

Now that most economists, in particular those economists that impact policy at the central bank, are no longer as concerned with unemployment as they had been when crisis-inspired policies were initiated, their focus has fallen upon inflation -- specifically, at the consumer level. Tied very closely to inflationary pressure would be wage growth, which is part of the employment data, and retail sales. The headline print there, as well as what consumers specifically purchase, has as much to say about consumer health and sentiment as does anything else. Not to mention, later in the day, the Census Bureau will also put business inventories to the tape. As that number prints with a two- month lag, there will be no "breaking news" segment at your favorite TV station. Yet as far as fourth-quarter GDP expectations go, this number will matter.

Germany, the backbone of the European economy, has been without an effective government since inconclusive elections in September. Suddenly, if you're the kind of kid who watches markets on and off all night long, just around 3am New York time, the euro took off like a bat out of heck. Huzzah. Angela Merkel's gang and the Social Democrats apparently had achieved some kind of breakthrough in their attempt to form a new coalition. Is the crisis of leadership over for Germany? That, I can't tell you.

What I can tell you is that the U.S. Dollar Index, which is heavily weighted against the euro, is scraping along below 91.5 this morning, nearing four month lows. One euro at the height of the morning trade bought you well more than $1.21. You know how I feel about a weaker dollar. As long as you're not thinking about taking a vacation overseas, this is very helpful as an increased catalyst for U.S. equities, particularly large-caps, just one day after a Thursday when small-caps had dramatically outperformed broader markets.

Possibly the only thing more complicated -- and interesting in its own peculiar way -- than today's release of quarterly earnings by the banks will be the actual earnings calls themselves. You will see a lot, and you will hear a lot. To help wipe out the background noise, this is where to focus today:

1) How ugly was trading this quarter?

2) Show me some loan growth.

3) We know about the one-time tax-related charges. Now, how much does the reduced tax rate help, going forward? What are the implications of shifting from a global to a territorial tax system?

4) Speak on regulatory relief and its impact.

There will be a lot more, gang, but these four pillars will decide directionally how the day ends as much as anything.

I have long been part of the pro-Walmart (WMT) team, both in print and on broadcast television. This has turned out to be one of my better trades of 2017, and perhaps one of my best-ever publicly made calls. I have, since initiating, increased my target price several times. The shares, you may have noticed, have started to move sideways, as the rest of the retail space catches up some.

The firm made some big headlines yesterday morning, as it was announced that there would be an increase in wages paid to hourly workers, as well as a special bonus paid to those workers. This was a real positive for the firm, publicity-wise. Then more news unfolded as the day wore on.

Walmart's warehouse chain, Sam's Club, announced that it will close roughly 10% of its stores over a few weeks' time. There are 660 Sam's Clubs, so we're talking about 60-something stores in total. The stores average roughly 160 to 175 employees per store. That adds up to somewhere between 10,000 and 11,000 folks. These employees will be offered 60 days severance pay. I get the need to reduce underperforming retail space. I get the part where the firm announced that 12 of these locations will be converted into e-commerce support stations. The parent firm's willingness to do whatever it takes and spend whatever it has to in order to fight Amazon (AMZN) anywhere, anytime, is what has impressed me so much about Walmart's leadership.

My problem is this. I have been down on my luck in my life. I know how it feels to barely, or not even get by. I know how it feels to hide your deteriorating financial condition from your young children. In some cases, it has been said that employees showed up for work to find that their store had already been closed. It is reasonable to think that these decisions must have been made in advance of the actual store closing, and that the folks involved probably really need their jobs. I feel that if true, then these folks could have been given some notice. I am likely to at least take some profits today, as this hits me square in the gut.

Back in the glory days of the old open outcry market, the Xerox (XRX) crowd was a fairly tough crowd. Actually, it was a little intimidating to a young floor broker proudly breaking in his new badge number. The stock traded in the room that was known to the New York Stock Exchange community as "the garage". The specialist, whom I will not name because I have lost touch with him, was excellent. He ran a clean crowd. Strict auction. You don't bid or offer out loud, simple: you don't buy or sell a thing. There were no "cap orders". You did not sheepishly "go along". You had to bring it, and so did the other traders. There were almost always at least five or six traders active in the name, even on slow days.

By the late 1990s, we are talking about a stock that traded in the $130s. That was way before numbers like that were normal. This was tough, and volatile. Not to mention that the stock was situated next to Dayton Hudson (now Target (TGT) ), as well as close enough to Citibank (C) (I do not believe that they were a "group" yet) and Corning (GLW) . All crowd stocks. All wild.

I can clearly remember being in awe of having a job where I could trade, and even impact a prestigious name like Xerox. I really feel it has been quite some time since anyone has considered Xerox to be "iconic". I don't think anyone trades the name with that sense of awe anymore. The stock has traded below $10 several times over the last two decades.

It is probably only someone whom the name had made an early impression on that could have purchased the shares in what was clearly an impulse-type purchase, when Carl Icahn made his comments in mid-December. Having established a position without going through my usual disciplines, the stock did not react, so the kid hung on. Enter the Fujifilm talks. OK, what now? Let's go the chart.

Chart of the Day: Xerox

I will admit to you that impulse purchases in this industry are extremely unwise -- if you admit that the Mets have a chance this year. OK, supposedly no deal is imminent, but Xerox and Fujifilm had talks. Poof. Looks like I recovered a gift fumble on the one-yard line. I am not going to act like I was smart. I am, though, going to take advantage of the situation.

The chart displays some oddities. For one, the stock suffered a death cross just prior to the New Year, yet the stock rallied with the rest of the broader market. Despite horrific looking money flow, the name has obeyed the Pitchfork model that begins with the November lows. That's a positive.

The negative? The name had exhibited resistance at a 50% retracement from top to bottom, October through the present. Yesterday's news event put the last sale above the central trend line that should have acted as rising resistance itself. That line could act as support. If it does, perhaps that might mean more news to follow. 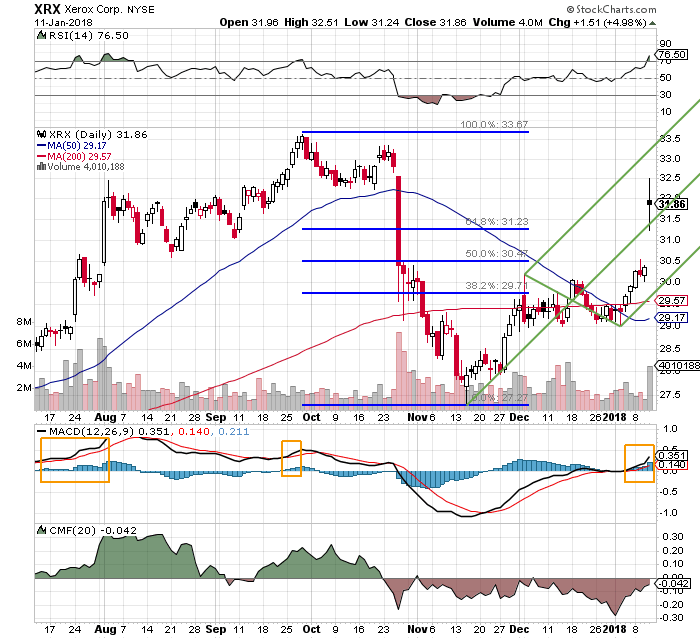 My take? I did not initiate this long for a good reason. This is found money. I will give it a chance to grow, here. That said, the stock crosses $31.50 to the down side, I take my football and go home, even if the other kids still want to play.

These are my levels to watch today for where I think that the S&P 500 and the Russell 2000 might either pause or turn.

Get an email alert each time I write an article for Real Money. Click the "+Follow" next to my byline to this article.
TAGS: Investing | U.S. Equity | Financial Services | Technology | Earnings | Markets | How-to | Stocks