"Game-playing is more fun when it's virtual, because you're more successful. In reality, only one person gets to be LeBron." -- Larry Ellison

I will readily admit that I do not "get" a lot. Understanding this about myself is key to my ability to continually adapt to an ever-changing business and economic environment. I do not smoke pot. Never even wanted to. I will still consider ways to make money as the trend toward broad, recreational legalization appears inevitable. Have no urge to own crypto-currencies. For one, I think that the planet's major central banks, at least those that control money supply in reserve currencies, will consider items such as bitcoin to be competition for their power at some point. I do understand that. Still, a large number of folks don't quite see it that way. More opportunity for me, as their demand spills over into the equity space.

There is one other thing. We all like to watch sports, right? This might be a tough nut to crack. Last night, the scores rolled in from Burbank, California. Seoul Dynasty 2 - Dallas Fuel 1. Los Angeles Gladiators 4 - Shanghai Dragons 0. Los Angeles Valiant 4 - San Francisco 0. No, most of the teams are not based in Los Angeles, though two of last night's three winners were. These were the final scores from opening night of the Overwatch League. Where did I get these scores (and stories)? Believe it or not, they were reported on ESPN's website as if they were scores from any other sport. Normal. Almost.

Will People Watch Other People Play?

Activision Blizzard (ATVI) is counting on it. My children are not children any more. They are men. Growing up, they and their friends did indeed watch each other play video games. This has died down as my children evolved into people who work full-time, but there is an interest there, much the same way that a man my age can watch baseball and football, even though age and fragility prevent us at some point from participating in physical team sports. The thought is that there is pent-up demand for this type of entertainment. So much so, that the streaming service "Twitch" has come to a $90 million two-year agreement with Activision to broadcast the matches, complete with announcers.

The key to success just may be that. That, at least in its early development, the Overwatch League will (other than the actual content) mimic traditional sport. The teams will be based in cities, and eventually play home and away games in front of live crowds. The owners of these teams, or at least some of them, come from well-established professional sports leagues such as the National Football League and Major League Baseball. Will the advertising dollars roll in? I would think that these types of owners had the ad sales game down pat, and would know how to package sales in such a way as to maximize exposure.

Activision Blizzard's rival Take-Two Interactive (TTWO) -- a firm, by the way, whose stock easily led the gaming industry in 2017 -- is teaming up with the National Basketball Association to build a pro league based on the firm's NBA 2K video game series. Interesting. A blending of traditional sport and e-sports seems more an attractive idea to this old man, but the younger demographic? I'm not so sure. They like shoot 'em up games, and games based on a story. We'll see how this develops. Both stocks are trading higher in the morning on light volume. Possibly significant is ATVI's last sale that I see is above the stock's long-term resistance. See the chart below for more.

Call me skeptical. Yes, I know that two Canadian sources told Reuters that they feel President Donald Trump will yank the U.S. out the trade deal that he has made no secret of his disdain for. By the way, American, Canadian, and Mexican officials will meet in Montreal in two weeks to try to hammer out an agreement.

The media has made much of the president's supposed intentions, referring to them as possibly being the tactics of negotiation. There are those in congress who undoubtedly would not support complete withdrawal. I don't think the president wants that either, though obviously I have not spoken to him. It does make for common sense that this president that has favored any policy supportive of the manufacturing base, and of a cheaper U.S. dollar, would seek to renegotiate terms. One other thing bothers me.

Why does no one in the media think that maybe two Canadian government sources talking to Reuters as way to put pressure on certain stock prices (something all believe matters to this president) might just also be the tactics of negotiation? I mean, duh. Anyone else notice weakness in General Motors (GM) , Ford Motor (F) , Toyota Motor (TM) , Kansas City Southern (KSU) and Constellation Brands (STZ) ? Bet you didn't know that Toyota was a huge importer into the U.S. ... from Canada. The game is afoot.

It's starting to look more and more like European regulators will, by next week, approve Qualcomm's (QCOM) $47 billion takeover of NXP Semiconductors (NXPI) . This is actually having a negative impact on NXPI shares this morning, as many have come out and put much higher valuations on this firm since that deal was reached.

There will still be enough hair on this deal going forward. Does the already agreed-upon price change? Does this impact Broadcom's (AVGO) interest in Qualcomm? At a base level, QCOM and NXPI do seem to complement each other. This will only increase the regulatory scrutiny, should AVGO proceed with that prospective deal. This story is still only in its infancy, I feel. I am long NXPI on valuation, and will likely remain so, although I do not expect to see me add on today's weakness until a clearer picture evolves. I have enough exposure to the space elsewhere.

Chart of the Day: Activision Blizzard

I found the chart of Activision Blizzard -- which is a holding in the Action Alerts PLUS charity portfolio that Jim Cramer co-manages as a charitable trust -- to be a tougher chart to interpret than it was back when I initiated. I have held a long position in the name for some time now, in anticipation of the "Overwatch League". It looks to me like although some optimism over the new league's prospects had been priced in, some skepticism that the firm could ever successfully launch the league also existed. Let's break this down.

Throughout the first half of the year (not shown), and into late autumn, Money Flow was strong, although the stock never really did look overbought. I try to show the mid-Summer attempt to put together a pattern that would have fit into an Andrews' Pitchfork model, but that model broke rather easily, and then the stock went sideways. Strictly sideways. Even Fibonacci Levels do not look right on this chart. Two things strike me as significant here.

One: you have heard of a double top? Well, here we have a six-time top. I don't even know what to call that. Obviously, something very heavy sat on this name at $67, but it, or they, were limited in the way that a portfolio has limits. Immovable. Stationary. Kind of like the Maginot Line. 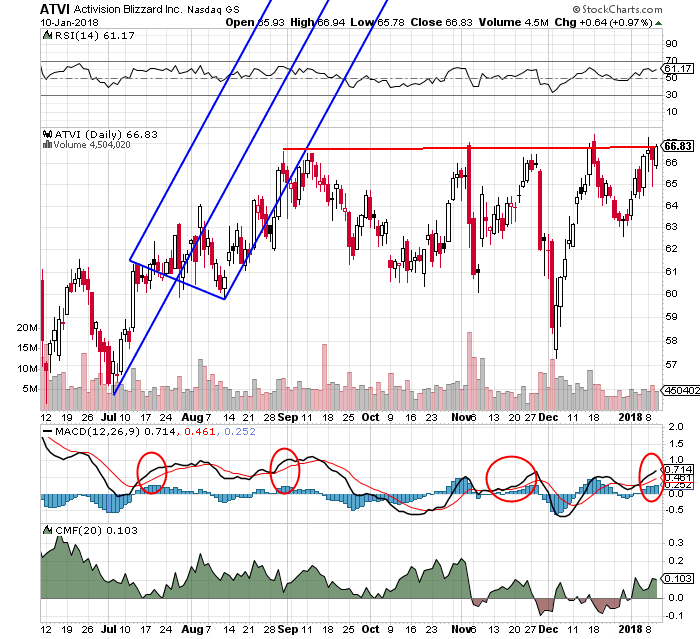 Two, take a look at the moving average convergence divergence (MACD). Yes, I see that as this name closed last night, this predictive short-term indicator looks very bullish. Look deeper. Not only are the 12-day, 26-day and nine-day exponential moving averages (EMAs) all in positive territory, they are all rising at the same time.

The red circles overlaid on the MACD all envelop places on this chart where those conditions were met, and every time, they were all worth a few bucks. The shares are trading above $68 as the creatures of the night crawl back to their dens. What does this mean to me, as someone long the stock?

Kicking Down the Door

It almost cannot be overstated how important it would be to see the $67 level tested from above this morning, and pass that test. No, the launch of the Overwatch League does not change the fiscal situation of Activision Blizzard overnight. It does, however, forcibly evolve the way markets will understand the stock. That said, even with that one blaring selloff on the chart, even upon potential failure to hold $67, it does look like the patient investor can add below $62.

Get an email alert each time I write an article for Real Money. Click the "+Follow" next to my byline to this article.
TAGS: Investing | U.S. Equity | Cryptocurrency | Technology | Markets | Gaming | How-to | Stocks

If You Enter Into a Long Position With Box, Use Some Finesse to Reduce Risk

Here's what to watch for when Box reports earnings Tuesday after the close.