Boston Scientific (BSX) doesn't have to worry about no r's or regional expressions with the strong uptrend underway on the charts. BSX made a four-year base pattern from 2009 through 2012 and that rally is still unfolding on the upside.

Let's visit with the charts and indicators to see what may lie ahead for the maker of medical devices.

In this one-year daily bar chart of BSX, above, we can see two corrections. The first correct is the price correction from early August to early December. The second correction is the decline in the On-Balance-Volume (OBV) line that started in early June and looks like it ended in early December. This subtle difference between the price action and the volume pattern tells me that traders and investors sold into the peak.

With the improvement in the OBV the past five weeks, we may have set the stage for new highs. BSX already was trading above the 50-day moving average line, but yesterday prices soared above the rising 200-day average. The Moving Average Convergence Divergence (MACD) oscillator closed above the zero line recently for an outright go-long signal.

In this three-year weekly bar chart of BSX, above, we can see how prices have doubled from their 2014 lows. Prices are back above the rising 40-week moving average line. The weekly OBV line followed prices higher in 2015 and flattened in 2016 with only a minor decline from September. The weekly MACD oscillator is crossing from below the zero line for a cover-shorts buy signal. An outright buy signal could come soon as the two averages are close to moving above the zero line. With only limited resistance overhead, let's see what sort of price target a Point and Figure chart would reveal. 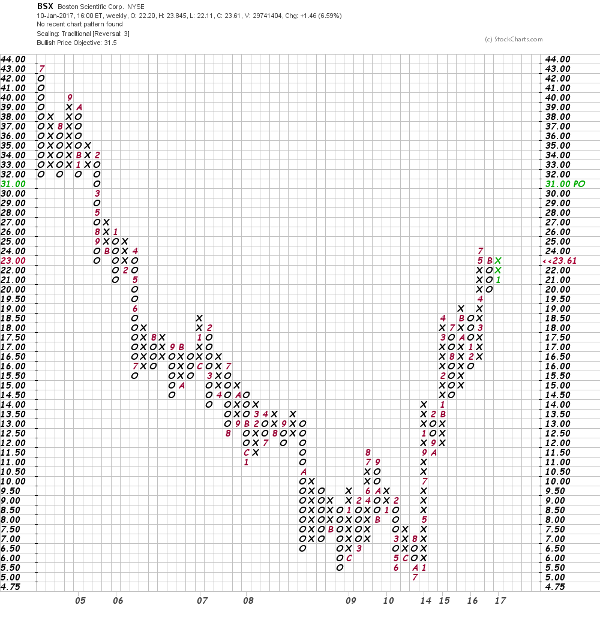 This long-term Point and Figure chart, above, shows a long decline, a base and a recovery. A move above $24 on this chart opens the way for a $31 price target. Risk is below $21 for now. Wicked.