"Do you want to live forever?" -- Two-time Medal of Honor recipient Dan Daly at Belleau Wood

The Sky Is Falling

I have a friend. This friend travels on vacation once a year to Las Vegas. This is his annual pilgrimage. He, like your author, grew up in Queens and is a life-long Mets fan. While on his vacation, every single year, this old pal will bet something on the New York Mets to win the World Series. He plays only with fun money. This friend has lost his bet every year since 1986. Maybe, some year, he will win that bet again. One thing he probably will not do, is actually predict that his favorite team wins the championship in any given season.

There are a number of professionals that regularly predict the market's downfall. You know what? The day is coming when these pros will be correct. Today, as a matter of fact, looks like it may get sloppy. Monetary conditions are changing. The Bank of Japan, all of a sudden, appears to be acting more responsibly. The European Central Bank is on the road to tapering asset purchases ... sort of. We all know that the Fed has been trying in earnest to tighten policy since late 2015 without upsetting either the marketplace, or the economy. Perverse conditions that were permitted to extend well beyond what was reasonable will not be unwound easily. Common sense, you would think, will allow for an increase in volatility.

Last night, Jeffery Gundlach, CEO of DoubleLine Capital, spoke, and what he said circulated throughout financial news circles overnight. In short, Gundlach sees a yield of 2.63% as a level for the U.S. 10-year as one which, if met, could accelerate to the upside, impacting stocks as well. Gundlach is a smart guy. I always listen when he speaks. He sees the possibility of a wobbly second half in 2018. A withdrawal of liquidity is indeed on the way. The questions remain, not only how much growth corporate tax cuts produce within the economy, but for earnings as well. I still see some support. Ten days into the new year, the markets do need a little blood-letting. That would be healthy at this point, don't you think?

The "Bond King" was on Twitter yesterday as well. Bill Gross of Janus Henderson tweeted "Bond bear market confirmed today. 25-year long-term trendlines broken in 5yr and 10yr maturity Treasuries." Running for the hills? Some traders are. Treasuries have clearly started to sell off in the deep end of the pool. Is that not precisely what we hoped for, though? Now, I am no guru, but I have been making my living by playing this sport professionally since the 1980s, and my thought is that I am not going to worry about the equity markets based on the long end of the yield curve, until that curve moves toward something closer to 3%. Even then, there will be places to hide in the equity space. Fear? No fear. Then, again, I'm just a kid with an opinion.

By the way, the chart below explains what Jeffrey Gundlach is thinking. 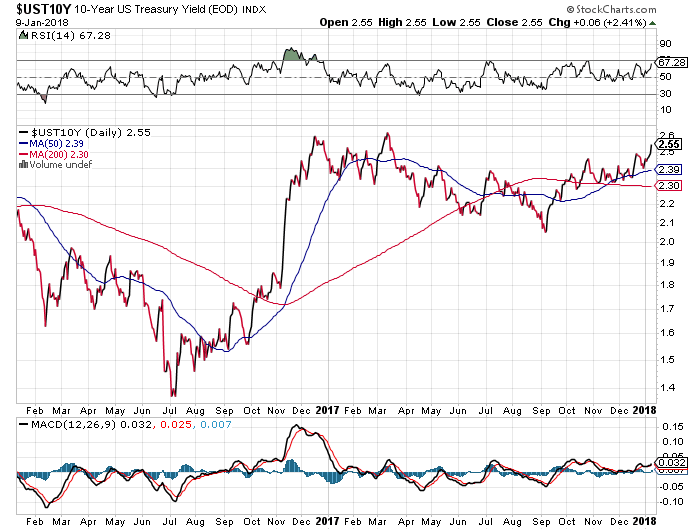 Remember Jason from the movies? The guy with the hockey mask? No matter how many times he had been supposedly killed off, when our heroes tried to walk away, he grabbed somebody's ankle. Many sequels followed in that particular story line. You just could not kill Jason.

Maybe you also just cannot kill retail. Troubled chain after troubled chain has reported slam-dunk numbers for the holiday season. Macy's (M) ? 1%. JC Penney (JCP) ? 3%. Even as rough a road as those two have traveled, they now show improvement. Yesterday was Target's (TGT) turn. Holiday growth of 3.4% had the firm increasing its fourth quarter, as well as the full year 2017 guidance. Rock on. Don't get me wrong, some parts of this business are still dying off.

I am old. I am not particularly fond of shopping on the internet, though I will do it. I am not particularly fond of crowds, either. Still, during the holiday season, I head out to my local brick-and- mortar businesses. I did much of my shopping this year at my local mall, and at Sears (SHLD) . Know why? Because you could go bowling in these places and not hurt anybody. While that remains an outlet for those unwilling to adapt to changing consumer demand, I do not expect to last.

Those chains that have learned to properly invest in their e-commerce businesses and to better manage inventory levels at their physical locations, and then merge the two into more of an omni-channel business, will be the winners. Some already are.

You all know that I have loved Walmart (WMT) for a long time. How do you not love a former champion that hangs on past their prime, and learns how to win again, all without ego or arrogance? WMT has run for most of 2017. A great company in the midst of evolving its businesses through store closures and alternative investment, while mixing in strategic partnerships with a dash of debt reorganization. These guys have a plan. Easy to love. Yet, I think I love someone even more. Enter the Dragon. Enter Kohl's (KSS) .

Kohl's simply blew up the industry, with a 6.9% holiday improvement year over year. Kohl's, too, raised 2017 guidance. You know, my wife and I don't really shop together much. The one place she asks me to accompany her, when she shops physical retail? Kohl's. Why? The crowds. No joke. I accompanied my wife on several trips to the stand-alone retailer this past season. Always crowded. Always well-managed. Long lines? Yes. The lines move remarkable well. While finding an open register in Sears reminded me of doing long-range reconnaissance in the rain forest long before GPS had been invented. The lines in Kohl's moved so fast that we barely had time to consider the store's impulse purchase-type offerings that had been strategically placed.

John McKay, head coach of the NFL's 1976 Tampa Bay Buccaneers who went 0-14 that year, was once asked about his team's execution. His reply: "I'm in favor of it." In retail, as in sport, execution is everything. KSS CEO Kevin Mansell appeared on Jim Cramer's show "Mad Money" last night. He spoke of the firm's three original pillars, "brands, value, and convenience." He spoke of the firm's strategic alliance with the likes of Amazon (AMZN) , accepting returns for the e-commerce giant, and even selling Amazon products in designated space within stores. Mansell's take? "How do we translate their (Amazon's) success into more traffic coming into Kohl's stores?"

Mansell spoke of the successful Kohl's Cash program (looking at 2B clams this year). As a married man, I can speak to the success of this particular item. My spouse and her colleagues actually call each other and trade this Kohl's cash among themselves, depending on who needs what and when. Home products? Think it's a small slice of the business? Mansell says that the home ran 10% higher and helped support the entire season for the chain.

I am not the only one to notice. Over the last seven days, six analysts have increased their 2018 EPS projections for the name. Seven for 2019. Those numbers stretch out to eight and 11 respectively, if I push out the timeframe to 30 days. Total debt is a hefty $4.55 billion, but down from a year ago. Total cash on hand comes to $736 million, up from a year ago. The current ratio of 1.63 is also up from a year ago, and implies no problem at all going forward in the ability of this firm meeting its obligations. Reminder: quick ratios make less sense for retailers than they do for other business lines, as stripping out inventory is not realistic in this space.

Lastly, even at the recent share price of roughly $57, this is a dividend stock. Kohl's pays a 3.9% yield, or $2.20 a share, and that little slice of heaven has been increasing year after year, by the way. Needless to say, I like Kohl's -- but is not the price a little toppy here? It is. Good thing you asked. Let's take a look.

I went in a little deep here, so you may need to be exceptionally nerdy to love this chart of Kohl's. Let's get the real basic stuff out of the way first. The share's price has gone semi-parabolic since early November. That's when the daily moving average convergence divergence (MACD) and Money Flow both turned on the juice. MACD is starting to flicker at high levels, but the nine-day EMA has actually turned negative. Does that matter? Probably. Short term, anyway. Relative Strength has been in beast mode for two months, and might actually turn into a supportive technical indicator, should it persist further.

The difficulty here is the projection of the eventual reversal, as nothing goes in one direction forever, and its timing. Using a Fibonacci Fan (red), the top line is your recent trend, the bottom three lines are projected retracement levels (38.2%, 50%, 61.8%) at future dates, should the trend remain unbroken.

Next, we'll use what are known as Fibaonacci Time Zones. Keep in mind we are playing with hand grenades here, not sniper rifles. These tools are not precision weapons. As always, you can throw out the first seven or so time zones, due to their own cluster. I am not making that up. That is how this game is played. However, the eighth time zone (and beyond) could very well matter.

That spot comes late this month. According to this "map", the areas of possible support, or entry if you just got here, could be at the current last sale of $57, $53, or roughly $49.50, but not for three weeks. That last one breaks, and I head for the hills. Just sayin'. Until then, if you've been following along, we're playing with house money. 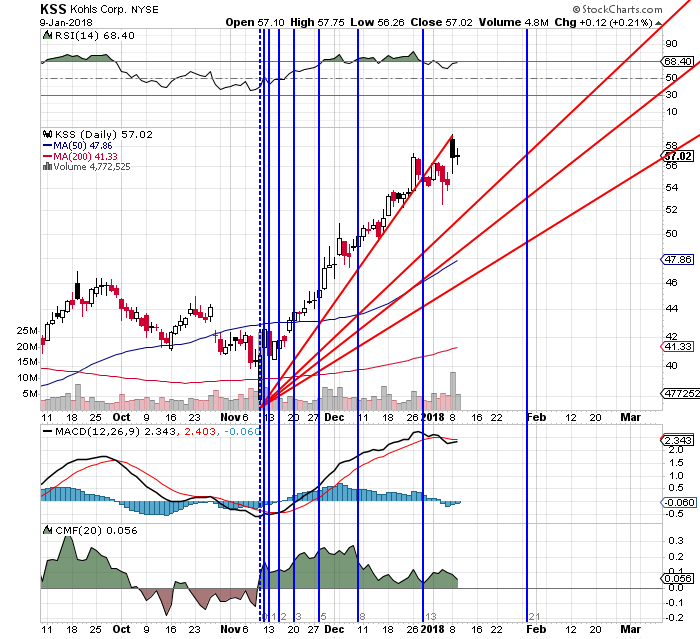 If you do not trust all of my mumbo-jumbo and you think Monday's $59.09 gap opening was "the high", then support for you crops up a little below $51. If someone needs the concept of Fibonacci Time Zones explained to them, I am e-mailable, and I never mind talking about this stuff.

A quick reminder to readers that today is the first call with subscribers of Action Alerts PLUS, the portfolio that Jim Cramer co-manages as a charitable trust. Click here for an exclusive video that takes a look at the portfolio behind the scenes.