Deere & Co. (DE) has surged to new price highs but the pace of the advance is slowing. What does that mean and should we worry about it? Back in August was the last time we spent some time with the charts of DE when we said, "Hang on to your green cap as DE corrects to the downside. The sooner price finds some support, the faster everyone can take a deep breath. Two closes below the 200-day moving average line will prompt a more-bearish appraisal."

With the benefit of 20/20 hindsight we can see that DE stopped short of the rising 200-day moving average line in late August and early September so longer-term traders and investors should still be long. Now that momentum is slowing a fresh look at DE is in order.

In this daily bar chart of DE, below, we can see that DE is above the strongly rising 50-day moving average line. DE is also above the rising 200-day line -- perhaps too far above it. The On-Balance-Volume (OBV) has been moving higher from early September support and confirming the advance with signs of aggressive buying. In the bottom panel of this chart is the 12-day momentum study. From early December to early January the 12-day momentum indicator has slowed -- the lower peak tells you that. This weaker momentum reading is a bearish divergence compared to the price action which is making higher highs over the same time period. Momentum is a leading indicator and typically peaks before prices do.

In this weekly chart of DE, below, we can see that prices are extended when compared to the rising 40-week moving average line but our other indicators are still bullish. The weekly OBV line has risen along with the price action which is bullish. The weekly Moving Average Convergence Divergence (MACD) has been following the trend higher and is not signaling any bearish warnings.

In this Point and Figure chart of DE, below, we can see the impressive rally. So far there are no indications of distribution. 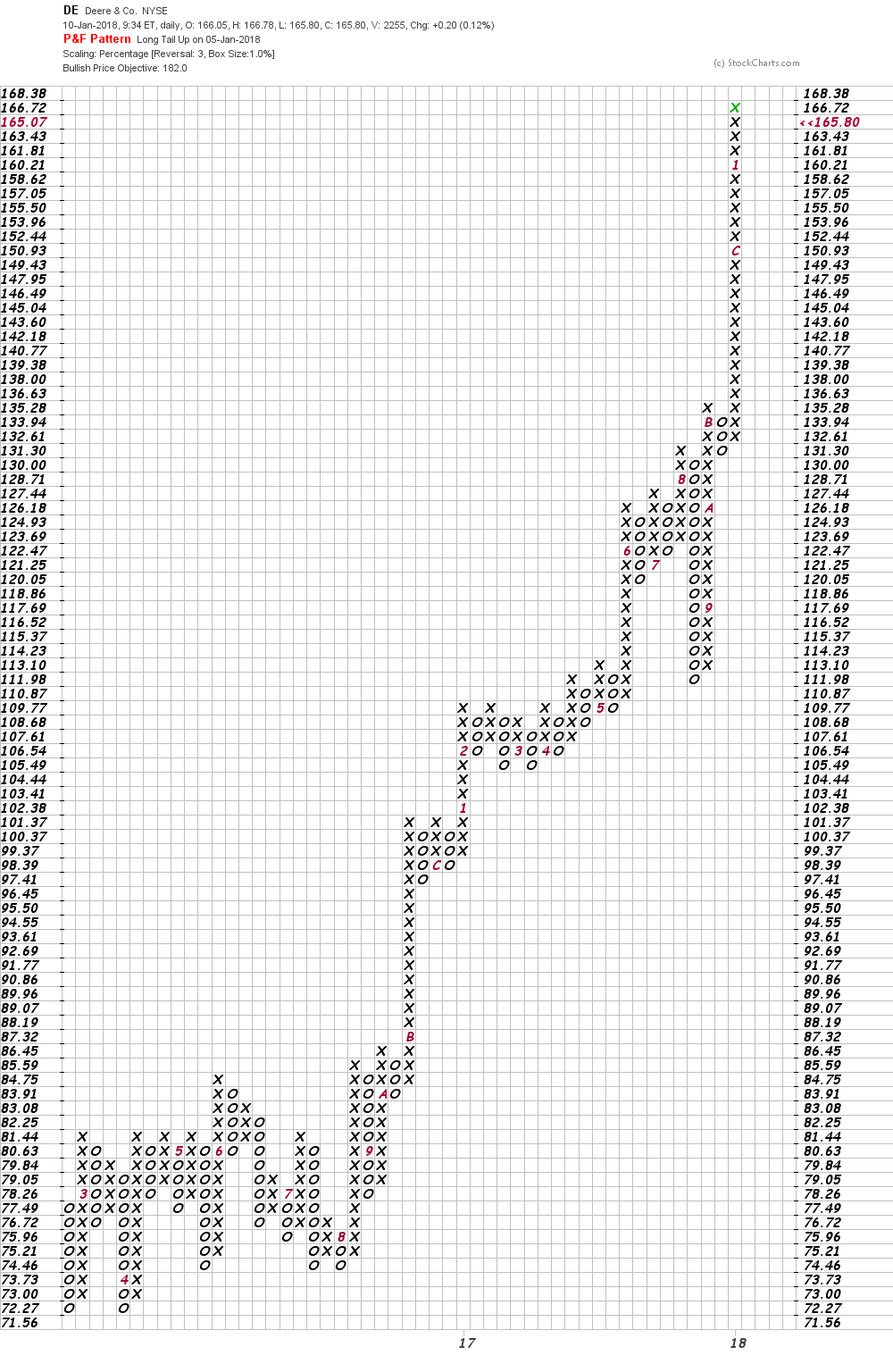 Bottom line: Momentum is slowing and prices are extended but that is not a reason to sell DE. A price reversal would be a reason to sell but that has not happened. Meanwhile, it would not hurt to raise sell stops to a close below $145 or below the 50-day moving average line.

Get an email alert each time I write an article for Real Money. Click the "+Follow" next to my byline to this article.
TAGS: Investing | U.S. Equity | Financial Services | Consumer Staples