Silly to think the love for semiconductors will end at any time soon. Heck, we can probably say the same thing about the market in general. It will end, or at least pause, of course, at some point. Where and when is the question and, frankly, no one has that answer until after the market answers it for us.

The VanEck Vectors Semiconductor ETF (SMH) is looking a bit tired as it struggles with the $104-106 level, a price the ETF has failed to break through twice now in the past six weeks. There's the potential for a double-top around $105, but shares could simply be consolidating. We are very short-term overbought (based on the daily chart), but if we stretch our view to the weekly picture, I don't see the same concerns.

Nvidia (NVDA) is everyone's darling, but there's more than one name in the semiconductor space. I've written about Advanced Micro Devices (AMD) several times in the past month.

At the times, the stock was trading near $10, then just above $11. I'm not one to chase here. The news about security threats on PCs and servers running on older Intel (INTC) chips has also weighed on AMD. Microsoft (MSFT) said its security updates froze some computers running AMD chipsets. AMD has stated its products had zero risks from one flaw and the other could be resolved with a simple vendor software update. Still, the shares are down some 3%+ today, twice that of INTC. This is likely a short-term event, but enough to scare off some recent momentum investors. 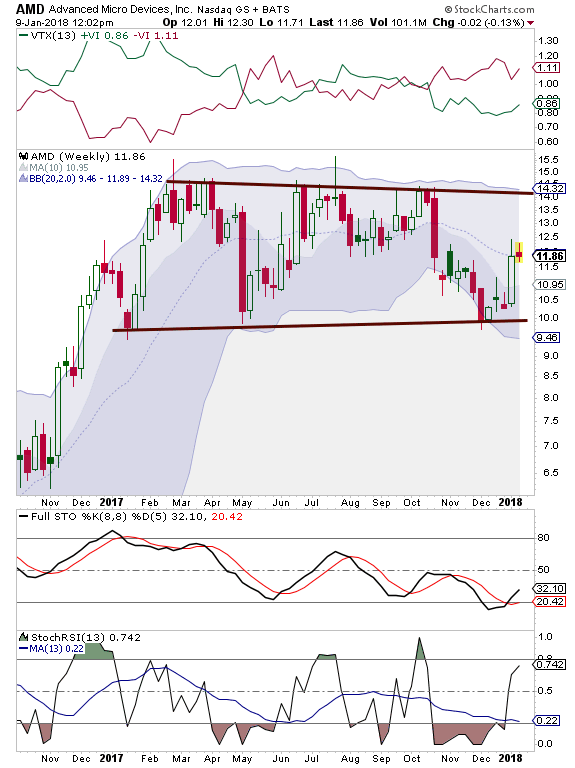 The stock itself is trading in the middle of a very wide trading channel developed over the past year. Upside equals downside here, so from a risk versus reward standpoint, it isn't compelling. I wouldn't advocate a short, but I would be patient and focus on buying a pullback around $11 or a breakout above $12.50. If I need to act now, my preferred approach would be selling the Feb. 16 $11 puts around $0.50.

I lean toward behemoth Broadcom (AVGO) for a core position. The company continues to do everything right, reporting earnings of $4.59 per share on revenue of $4.85 billion last quarter. Both exceeded analysts' estimates.

Revenue guidance of $5.3 billion next quarter crushed estimates of $4.8 billion. Most importantly, the company is still growing organically at 5% despite sales approaching $20 billion. Given its $100 billion+ market cap, smaller acquisitions in the $1 billion-$5 billion can be used to spur growth, not just a mega-acquisition like Qualcomm (QCOM) .

Of course, the Qualcomm acquisition may not happen, but that's another name I want to own along with NXP Semiconductor (NXPI) . What's clear to me is Qualcomm, NXP, and Broadcom will not be three separate companies as we roll into 2019. They may be two or simply one. And whether it is Broadcom as one and Qualcomm/NXP as another or Broadcom/Qualcomm as one and NXP as a stand-alone, all of them should emerge winners. If the three were combined into a single company, it's the one semi name I'd want to own, even ahead of Nvidia. Ironically, I could see AMD getting swallowed into this potential insanity before the end of 2020.

One name I don't hear discussed much in all the semiconductor-related cryptocurrency talk is Taiwan Semiconductor (TSM) . TSM is at the heart in terms of "picks and shovels" when it comes to mining and verifying cryptocurrency. The issue is the massive size of TSM makes its net exposure small, but it is worth noting and watching.

Stepping outside of traditional semi names, Universal Display (OLED) and SolarEdge Technologies (SEDG) make a good compliment to the handful of names above.

Universal is focused on organic light emitting diode (OLED) technologies for flat panel display. The company is a licensing and material play, and dominates the space almost in a monopolistic fashion. Currently, your find its applications in both the iPhone X and Samsung GS9 as well as Samsung's OLED televisions. Recently, the company signed a long-term deal with BOE Technology, China's largest display panel manufacturer and the third largest in the world behind Samsung and LG. 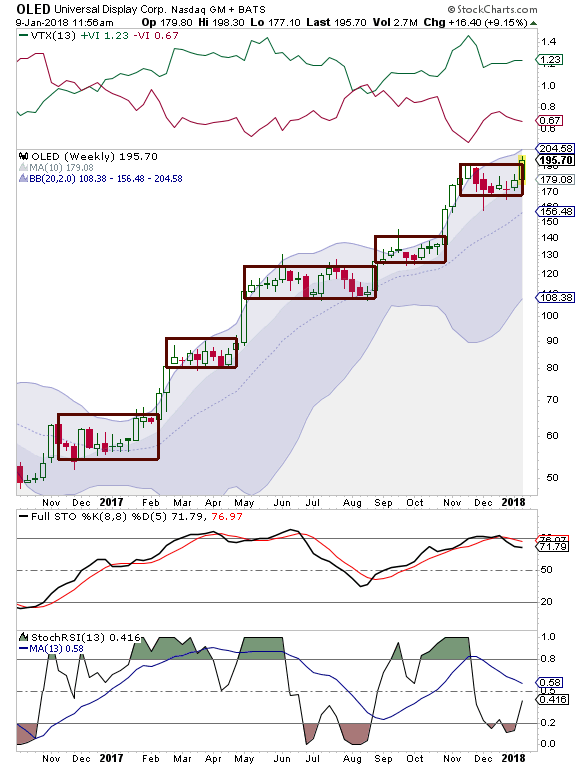 From a technical perspective, OLED has been trading in the same repeated pattern for a year. A few months sideways followed by a push higher followed by more sideways action. The trend is your friend until it ends.

For now, I'd continue to trade the trend, which appears to be making its next leg higher toward the $215-225 range. If OLED trades back under $165, then the trend is dead and it will be best to hedge a long position or wait until signs of a bottom develop.

SolarEdge is probably the most aggressive of the group despite no debt, a huge pile of cash, and strong cash flow. The challenge here is the dependence on solar and the threat from Huawei's new optimizer product. Still, the company is looking at double-digit top-line growth through 2019 and trades at a modest P/E of 23 for a high-growth company. 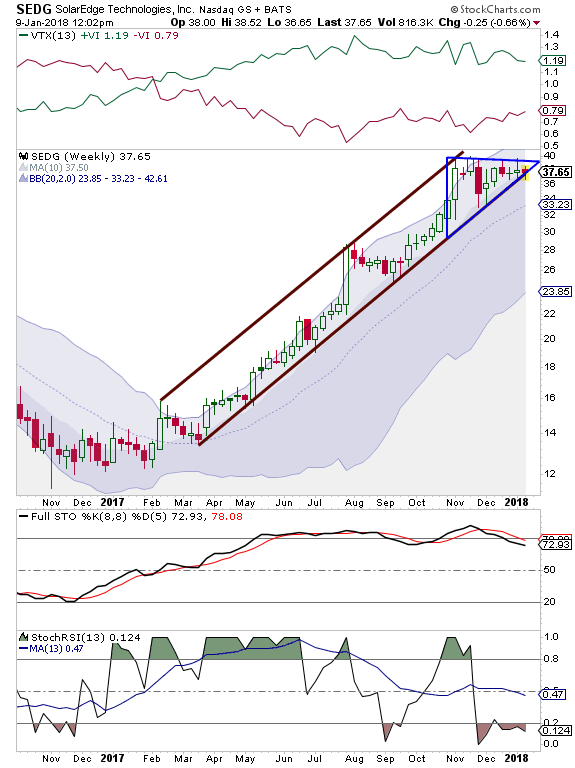 I put SEDG alongside of AMD: If I didn't own it, I'd be patient, but keep it close to the top of the watchlist on the buy side.

I prefer stock-picking here rather than the general ETF. It allows an investor to diversify within the semiconductor sector, which is very broad in and out itself. Use a core of big names like AVGO, TSM, and/or QCOM mixed with smaller names like AMD, SEDG, and OLED to provide the best risk-return metrics.

This commentary originally appeared on Real Money Pro on Jan. 9. Click here to learn about this dynamic market information service for active traders.

Universal Display is a holding in the Trifecta Stocks portfolio.

Get an email alert each time I write an article for Real Money. Click the "+Follow" next to my byline to this article.
TAGS: Investing | U.S. Equity | Technology | ETFs | Funds | Options