3M Co. (MMM) was reviewed in October where we concluded, "Traders and investors should stay long." The price of MMM has continued to gain from early October but a tweak of strategy may be in order now. Let's review the charts and indicators.

In this daily bar chart of MMM, below, going back 12 months, we can see an impressive rally from $175 to shy of $245. Prices are above the still rising 50-day moving average line but notice that the line was tested earlier this month. MMM is above the rising 200-day line and extended like it was in June. Trading volume looks like it has declined from late October.

The On-Balance-Volume (OBV) has been flat or neutral since late October and this is a divergence and suggests that buyers and sellers of MMM are in balance. In the bottom panel is the 12-day momentum study and I can see a peak in late October and a lower peak in late November/early December. At the same time, the price of MMM made higher highs from late October to late November. This is a bearish divergence and tells us that momentum is slowing. This might foreshadow a sideways to lower period of trading.

In this weekly bar chart of MMM, below, we can see a couple signs of potential weakness to out point. Prices are above the rising 40-week moving average line -- actually at their widest point above the 40-week line looking at the past three years. The weekly OBV line has improved the past year but its movement has not yet bested the 2016 high even though prices are significantly above their 2016 zenith. The trend-following Moving Average Convergence Divergence (MACD) has narrowed towards a possible crossover and take profits sell signal.

In this Point and Figure chart of MMM, below, we can see the impressive rally. Prices have stalled or consolidated a little in the past three months. A decline to $231.52 could weaken this chart and a decline to $224.71 could mean more weakness. 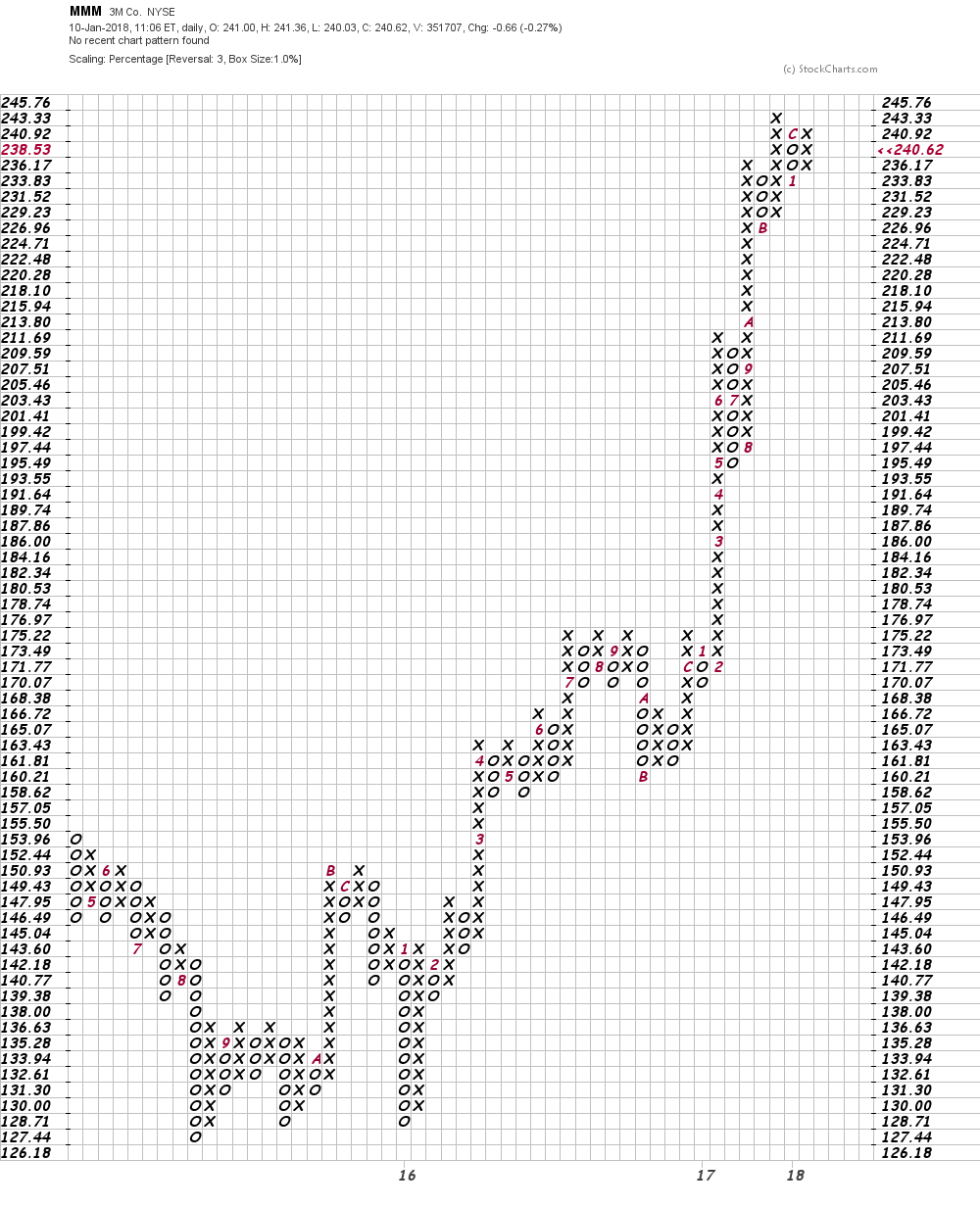 Bottom line: While it might be unpopular to suggest that a member of the Dow Jones Industrial Average (DJIA) could pull back with the markets at record highs, I think it would be prudent to suggest taking some money off the table looking to rebuy MMM at lower levels.

Get an email alert each time I write an article for Real Money. Click the "+Follow" next to my byline to this article.
TAGS: Investing | U.S. Equity | Consumer Staples | Healthcare | Technology