"Issue the orders Sir, and I will storm Hell."

They come. First the ground trembles. That tremble turns into a low roar. As unstoppable as the Mongol Hordes of another time comes earnings season. Inspirational? Fearful? Each season tends to emit its own overt personality. No way to stop it. Only one thing to do. Tape on the foil.

Just how fired up should investors be over earnings season? More immediately, what do we do about the banks? We have gotten used to earnings growth in these parts. Kind of like Alabama winning national championships in college football, earnings growth has become normal, expected even. Fourth-quarter earnings begin in earnest this Friday. In fact, some numbers have already started trickling out. We no longer have the old Alcoa (AA) acting as an 8 a.m. school bell to let us know that it was time to get to class. To re-focus. For all intents and purposes, the role of that ringing bell is now played by major banking.

Across the broad spectrum of the U.S. marketplace, we look for close to 9% fourth-quarter earnings growth year over year. This should be on roughly 7% revenue growth. Energy should lead the way by a wide margin, while posting some gaudy looking data thanks mostly to just how poorly that sector had performed. The Technology sector should also sport nice gains. No surprise there. Rock on.

The Financial sector? There's going to be some hair to untangle in this space, so get your pencils out, and make sure they are topped with erasers. For the entire sector, you will likely see earnings growth come in somewhere between 3% and 3.5% depending on who you read. Revenue growth should print above 2%. Don't forget, the broader sector includes insurance companies that spent much of the fourth quarter dealing with hurricane response. The banks, well, they have had their own issues.

Don't be scared if you see some minus signs. Consensus expectations for the big kahuna, JPMorgan Chase (JPM) are for earnings per share of $1.69, on revenue growth of 7%; $1.69 would be lower both year over year, and sequentially. There is obviously hope, though. JPMorgan has a habit of crushing expectations in this space, and the whispers that I have heard are high enough to at least represent year-over-year growth. We are going to want to hear about growth in the loan business. Trading revenues, given the lack of volatility, particularly across fixed-income markets probably will not impress. Then there's tax reform.

Obviously, tax reform, which should be welcome for the group, has a nasty side. As most of you know, your favorite large banks have already come out and announced one-time charges associated with accounting changes that will now have to be made. Don't I know it, Citigroup (C) batted lead-off in this department when the firm announced that it was staring at a charge of $20 billion. I am long that name, and continue to be, based on valuation. Still, the stock has gone sideways for six weeks now.

(JPMorgan Chase and Citigroup are holdings in TheStreet's Action Alerts PLUS portfolio.)

It's not really all that complex. Yes, repatriation of funds does have something to do with it, but the real kicker are losses stretching back several years. I know you all remember the kidney punches taken by the big banks back during the financial crises. Well, the banks have been able to defer these losses, and use them to defray current and future tax liabilities. Got it? These losses were actually assets on the banks' balance sheets. Poof, you knock the corporate tax rate down to 21% going forward, and these assets are no longer so valuable. In fact, you may need to rush more of these losses forward than previously expected. Ooohh.

Though Citigroup is the poster child for taking one-time charges like that this quarter, others have also pre-announced large charges that look small only in comparison to Citi's. Goldman Sachs (GS) is expected to take a $5 billion charge, and the list goes on. Morgan Stanley (MS) $4 billion. Bank of America (BAC) $3 billion, and the already mentioned JPMorgan ($2 billion).

You know has not spoken up on this? That's right, Wells Fargo (WFC) . Wells Fargo will have to say something in reference to this negative theme on Friday. Wells Fargo will also have to tell you that the scandals that plagued the firm last year are behind them. Does the public buy that? Does Wall Street buy that? I'll tell you what, they have all been buying the stock. After lagging the industry group for most of the past year, Wells Fargo has rapidly been playing catch-up, and has been large banking's leading performer coming into earnings.

Wall Street looks for pedestrian improvement from Wells this Friday. The clean-up hitter might just be PNC Financial (PNC) . Those guys are smaller than the other big names reporting that day -- meaning that improved numbers have the ability to, in percentage terms, rip the cover off of the ball. Expect to see double-digit EPS growth from these guys, and revenue growth that looks strong, at least on a year-over-year basis, if not sequentially.

How these firms feel about the new tax law, and economic growth going forward will ultimately matter more to traders than will Q4 performance, though obviously both will matter. I have been less aggressive in this industry myself in recent years than I had been in the past. Do I need to play the group at all? Can I get enough exposure from the ETFs? Does a bull market even stay in the driver's seat without a significant push from this group? Let's try to make some dough. 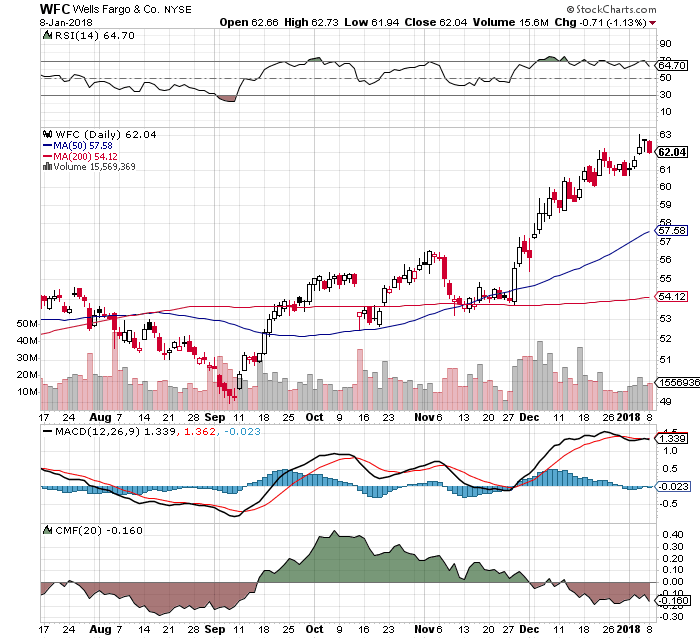 Think the recent run by Wells Fargo is too good to be true? Note the sloppy money flow, and the soft looking MACD (moving average convergence divergence). I am not really willing to risk substantial capital on the name either way. I don't really like being a wallflower either. One way to take a directional shot, while exposing some skin to the game, but not enough to ruin your day would be through the use of what is called a "Bear Call Spread." That is if you think a specific chart looks a little toppy.

For the advanced crowd, "bear" with me. Get it? Retail investors intimidated by options markets might appreciate a tutorial. For WFC, I will go out a week past earnings, so I am looking at Jan. 19 expirations. What I would like to do, and these strike prices could change as does the last sale, is sell (write) a call option with a strike price close to the last sale, and then purchase a call option with a higher strike price at a lower price. Too easy, right?

Your potential for profit is the gap between the revenue raised through the sale, and the price paid for the purchase. No equity involved. Your potential loss is a run by the stock to the upside. That means that one's conclusion has been incorrect. The good news is that this individual bothered to buy protection, and thus will not get his or her face ripped off. The max loss would be the gap between the strike prices minus the revenue raised (less price paid) through the options trades.

Remember, for the purposes of this example, you expected the price to drop, making the risk reward worth it. If that is not the case, no sweat. Take this example, and apply elsewhere. 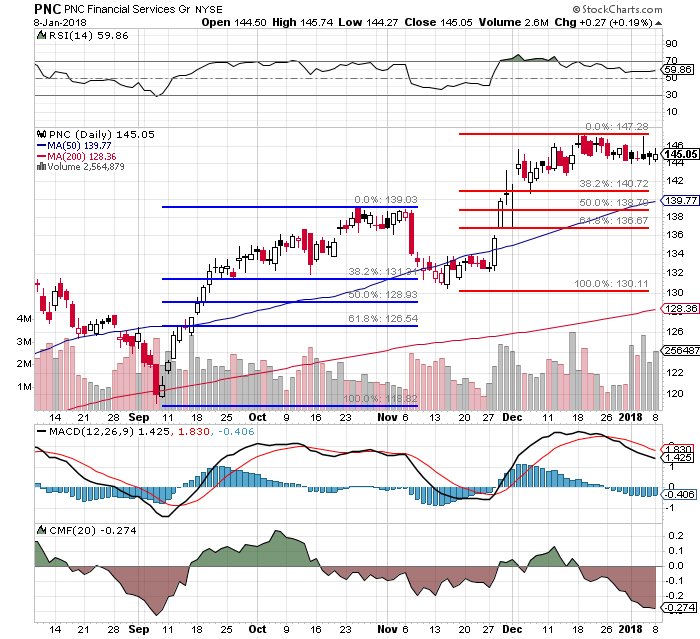 Intrigued by PNC Financial? Me too. Kind of want to buy it, but not here, not in front of earnings? Me too. I'll tell you what I'm thinking. Money Flow rots. Plain and simple. MACD? Not so hot. Relative Strength? Yeah, thanks. You tell me nothing. The Pitchfork is useless on this chart. I took it down.

Fib levels? They have worked in the past. Perhaps they work again. What they tell me is to wait. Stock goes higher -- nothing ventured, nothing lost. Stock goes lower...maybe, just maybe I leg in starting around $140. We'll see. That's where the 50-day SMA (simple moving average) lives by the way. For the dividend lover in you, the name pays more than 2%, by the way. Sarge out.

Get an email alert each time I write an article for Real Money. Click the "+Follow" next to my byline to this article.
TAGS: Investing | U.S. Equity | Regulation | Markets | Financial Services | Futures | Earnings | How-to | Newsletter | Options | Politics | Stocks