For most of 2016, we searched for value in oil stocks, while ignoring natural gas. I'm still a big bull on oil stocks, but I see value in natural gas stocks as well coming at certain times in 2017. One of those moments, I believe, is now.

We had an interesting end for natural gas in 2016, as prices spiked overseas, sent higher with the intensity of the cold weather in Europe. While the Arctic has experienced one of the warmer starts to the winter on record, that has boomeranged into historic cold that began in the Siberian plains and has been sweeping westward through Eastern and Western Europe. The big move upwards in European natural gas prices definitely inspired a major influx in speculative buying, marking one of the most overall bullish positioning in U.S. natural gas futures we've seen since 2014. 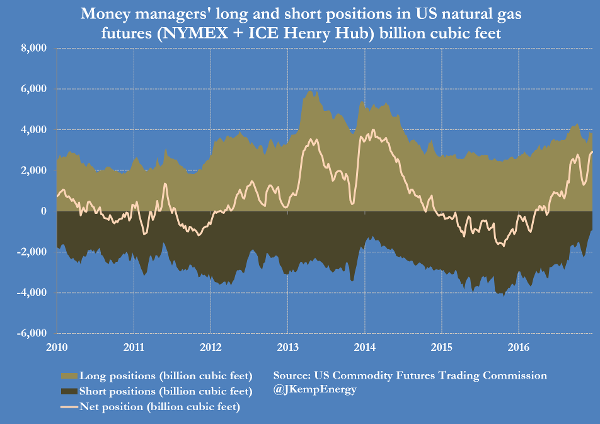 Well, the trader in me will tell you that it almost never fails that markets will look to respond negatively to a majority position, even if the fundamentals are very strongly in their favor. Sure enough, natural gas took a major dive last week and continuing through today, as markets punished traders who thought that the strong coming of winter in Europe would translate into $4 per MCF-plus prices in February here in the U.S. 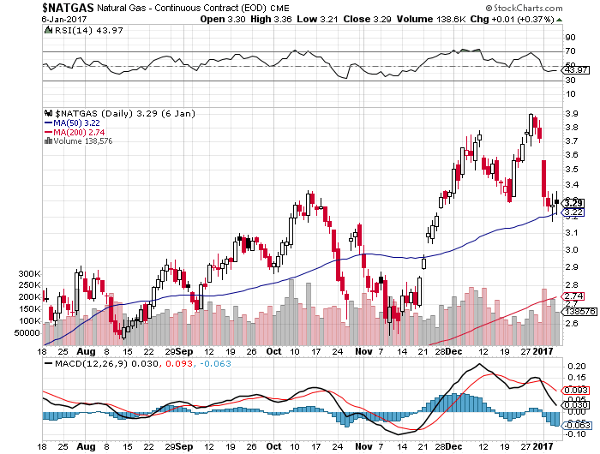 I continue to call this massively volatile move to the downside interesting because I believe the traders, for the most part, had it right. Fundamentally there are real reasons to believe that the gluts that have plagued U.S. natural gas prices are in the process of clearing -- and very quickly so -- leaving a grand opportunity right now to take the panicked positions of "long and lost" natural gas traders from them at relatively bargain prices.

Here is a representation of how quickly stockpiles are shrinking here in the U.S., despite a much warmer-than-normal November and December: 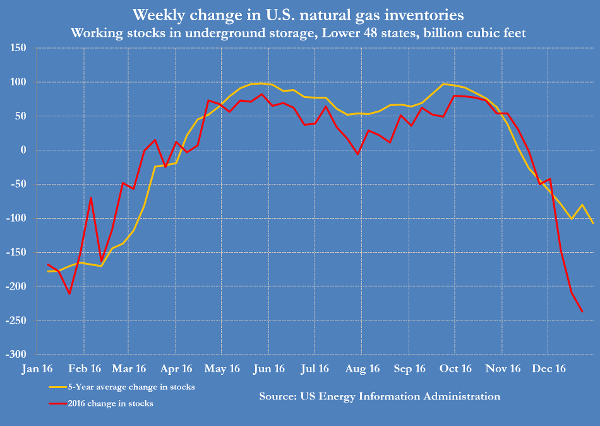 So, I believe that a majority of spec traders flooded into the natural gas trade prematurely and caused their own collapse, despite all the fundamentals saying to the contrary that their analysis and instincts were right. It does happen far more often in natural gas than just about any commodity, as even the smallest "leak in the dike," for example the 50-plus degree day we had on Tuesday last week here in New York, would be enough to cause an avalanche of panicked longs.

Still, I think it creates a short- to mid-term opportunity to buy just about any dedicated natural gas stock you'd like for the next few weeks -- with a terrific risk/reward.

My favorites are currently EQT (EQT) and Southwestern Energy (SWN) , but any should react positively to the return to fundamentals that dropping stockpiles and colder weather would suggest, including Range Resources (RRC) , Cabot Oil & Gas (COG) and even Chesapeake Energy (CHK) .

Get an email alert each time I write an article for Real Money. Click the "+Follow" next to my byline to this article.
TAGS: Commodities | Markets | Energy | Investing | How-to | Stocks