When weighing daily vs. weekly charts, the scene from the end of the movie Trading Places comes to mind.

The lobster or the cracked crab?

What do you think?

Can't we have both?

Both. It's an interesting idea. When reviewing timeframes of trades, the chart setup will often be my guide. A short-term, scalp-type of trade, will fall under the daily chart. A swing trade will depend on whether I'm looking for two weeks or six weeks. Anything longer than six weeks and I'm using a weekly chart and not paying much attention to the daily.

Ironically, when I'm buying based on a daily chart, I still glance at the weekly chart, though. Whether it be a trend or a counter-trend trade, I still want to have an idea of the longer-term trajectory.

For those who don't appreciate the "excitement" of flipping back and forth between charts of two different timeframes, you can combine the concepts. It's important to note, however, the method is fluid, not perfect. From time to time, you'll want to adjust your daily indicators, especially if you've made changes to your weekly.

Let's use Broadcom (AVGO) as an example. 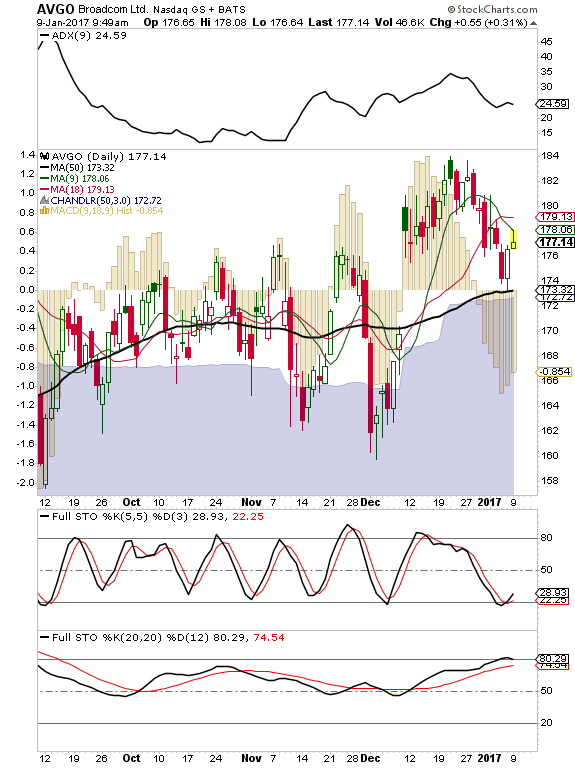 Reviewing AVGO's chart, one finds several short-term indicators. The average directional index (ADX) (9) gives us a hint at the short-term trend using only nine periods in its calculation. The price chart includes the nine-day and 18-day simple moving averages (SMA), neither of which are considered long term.

It also includes the Full Stochastics (5,5,3), which is very tight in terms of timeframe. It's the fastest-moving secondary indicator on this chart. Lastly, the moving average convergence divergence (MACD) (9,18,9) is set up as a faster-moving visual of the two short-term SMAs.

It doesn't take much to add a few hints at longer-term trends and/or support levels. In this case, I've added two, which I find plenty, but some traders may prefer a third, since we've taken any weekly price patterns out of the picture.

I find the 50-day SMA as the simplest and most obvious indicator to add. The 50-day SMA isn't going to drive a lot of decision making, although some folks may use a break or a bounce off the average as a trade. I like to think of it as a giant reminder. Bad things happen below the 50-day SMA. That's not an absolute, of course, but I've watched more stocks get pummeled while under the 50-day SMA than over it. If I'm buying a stock below the 50-day SMA, then I'm classifying it as a counter-trend trade.

My second addition is stretching out the Full Stochastics to 20,20,12. On the weekly chart, I use 5,5,3. The initial thought is simply to multiply everything by five, but I found a multiple of four matches the crossovers on the daily more accurately with the weekly chart. We could delve into the math of it all, but it comes down to the measurement points.

In the end, this is still a guide on trend more than a trigger, so traders will want to adjust for their own comfort level. In this case, though, I'm using the midline a bit more than the crossovers. Is the longer-term Full Stochastics still above 50? If yes, then I'm leaning bullish. If it is trending higher, then I'm leaning more bullish.

The idea of adding additional indicators is not to complicate things. A quick glance is all that should be needed when analyzing the new additions. These are guides, not triggers, and if you treat them as such you'll find them as a welcomed addition to daily analysis.