"The most dangerous thing in the world is to try to leap a chasm in two jumps." -- David Lloyd George

I am going to go out on a limb and guess that most of my readers today have never fired an anti-tank missile. Over many years, though I had fired a simulator many times, I have actually really only fired live anti-tank rounds using the hand-held variety a few times, and a live TOW round (not a cement head) from a vehicle only once. Why is that? They are dangerous, but, just as important, these rounds are expensive. Using the real thing in practice would blow up an infantry unit's training budget for the entire year in no time flat. That would leave less resources available for other kinds of training, which have proven over time prove to be far more practical.

Well, I came across some news on Sunday that took me back to this thought. While using dangerous, expensive toys might be fun, especially when you play for the wining team, there will be days when you wished you had stuck to something more useful over time, more practical. I am certainly not one to tell others how to trade, nor invest. What works for some may not work for others. What works for me is a rather conservative style. I try to mesh my own fundamental analysis with my own technical take. I also try to gauge those results against what I see as trends overlaid upon the marketplace from both the macroeconomic and policy making arenas. Coming to one's own conclusions based on all of that is tough enough. There will be those who come along and provide shortcuts. Take that path, if you like. I will stick to the horse that I rode in on.

Just in case you thought that Bitcoin was not volatile enough comes this. The New York Stock Exchange has apparently filed with the SEC a request to allow five Bitcoin-related ETFs to list for trading on the exchange's Arca marketplace. Hmm. Seems kind of aggressive, Sarge. Just what are we talking about here? I kid you not, gang. We are talking about leveraged and inverse funds that for the most part will aim, by tracking Bitcoin futures already trading at the CBOE and the CME, to multiply the actual volatility of the underlying product. Yes, multiply the actual volatility. How's your tolerance for risk, gang?

Many of you know how I feel about leveraged ETFs of any kind. I am not really comfortable with the idea. I feel that such a trade-able product is just that: trade-able. Not invest-able. Most leveraged ETFs will tell you upfront that they are not meant to be held long-term, and these ETFs, created by Direxion Asset Management, are no different. The five proposed ETFs will include three Bull Funds, 1.25x, 1.5x, and 2x, as well as two Bear Funds, 1x, and 2x. I repeat: These funds will track futures already trading in Chicago, and not actual Bitcoin.

Make sure you understand that at least from my vantage point, these will be day-trading products, not very likely to successfully accomplish stated goals over longer timeframes. One more thing. When you do fire a missile of any kind, the projectile does indeed reach the target in a hurry. Very easy to forget that anything that happens to be standing behind the gunner gets fried too. Double edged sword.

Nvidia CEO Jensen Huang opened CES 2018 last night. The well-known leader of one of 2017's best performing tech stocks announced at the annual trade show that Aurora would be making use of the firm's Xavier processor. Who is Aurora? One of 320 companies working with Action Alerts PLUS charity portfolio holding Nvidia (NVDA) to develop autonomous driving technology, according to Nvidia's CEO. The firm also announced that it is working with the likes of Uber, Baidu (BIDU) and Volkswagen (VLKAY) for the first time.

Why is Nvidia's Xavier processor so sought-after across this infant technology? Perhaps it's the ability to deliver 30 trillion deep learning operations per second, while using but 30 watts of power. Wow. someday, the machines really are going to take over, aren't they? In the meantime, let's profit. Need more NVDA news? That's fine, because we indeed have more.

Nvidia has also announced that it will be partnering with Acer, Asus, and HP (HPQ) to pair Nvidia's G-Sync technology as well as an Android TV-based Shield Platform with a 65-inch 4K screen with 120Hz HDR support. Got all that? This will not impact my nights and weekends, but for the hardcore gamer, it just might. For those gamers, this will be one giant leap away from traditional desktop displays. We will not even see pricing on this until the summer; expectations however are that demand will not be a problem. Get used to the acronym BFGD (Big Format Gaming Displays). All I know is that I am staying long the shares. That's my game.

Chart of the Day: Nvidia

Many of you took the 2017 ride to victory in Nvidia. I did as well. We are not smart, or elite, but among the many. The chart, the performance of the industry, the performance of the entire sector tells us that. Though, to our credit, most of us did not screw up this chance to realize large gains. Not that I didn't try, to be honest.

The question now becomes this: Just how much juice can we still get out of this thing? I am sure it's not lost on any of us just how kind the last four business days have been. Let's see if a glance at the charts tells us anything. We'll take this thing back to June, as that was the last major selloff in the name prior to the one just experienced.

There are several supporting indicators that quickly meet the eye. The moving average convergence divergence (MACD) that flipped bullish at the bottom of the recent move now has all three components in the green, though the 26-day exponential moving average (EMA) just got there. Money Flow has resumed its upward pressure on the name, after taking about a month off. Relative Strength is close to, but not yet where I consider a stock to be overbought, and has not hit that level for about 10 weeks. 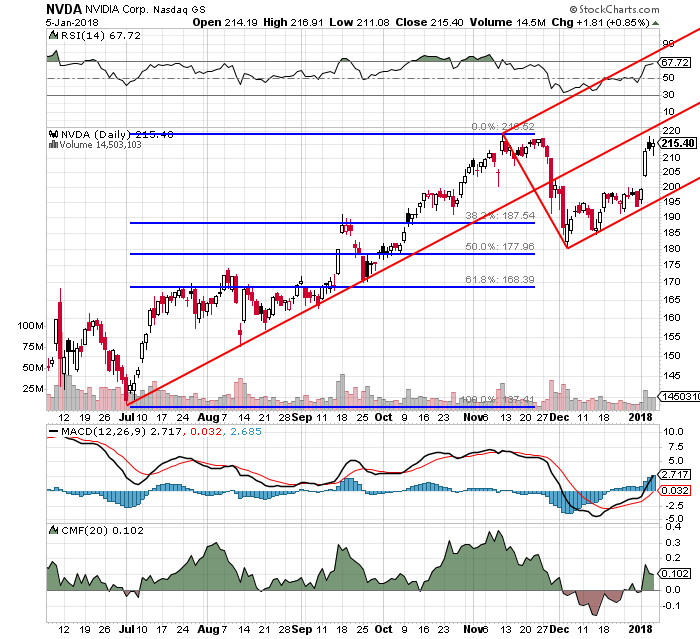 Your Fib levels (blue) show that a falling knife was indeed caught close enough to a 50% re-tracement in early December, followed by more substantial support up around 38.2% declines. That, to me, means that we can trust these levels should the name again fall out of bed.

The Pitchfork (red) model indicates algorithmic obedience to the lower trend line. This could suggest upcoming resistance at the central trend line. That still gives us at least a few bucks. Think sideways movement around $220/$221.

That will also be where overcoming a double top becomes an issue. This level will not likely crack easily, but how many times has this name in particular overcome technical resistance? A take and hold there, and $240 becomes possible, at least until NVDA reports. That fateful day comes one month from today, on Feb. 8. Dr. Huang?

Get an email alert each time I write an article for Real Money. Click the "+Follow" next to my byline to this article.
TAGS: Investing | U.S. Equity | Regulation | Markets | Cryptocurrency | Technology | Bitcoin | How-to | Stocks