Nothing breeds future investment success like buying in the face of negative headlines. Few venues have as much negative shock value as a scathing profile on the 60 Minutes TV show.

Bad publicity on Lumber Liquidators (LL) in March 2015 nearly killed the company. Its shares plunged from $70 to $10 over about a nine-month period before finally stabilizing. Bargain hunters with patience, though, got rewarded as LL gradually worked its way back to over $41. 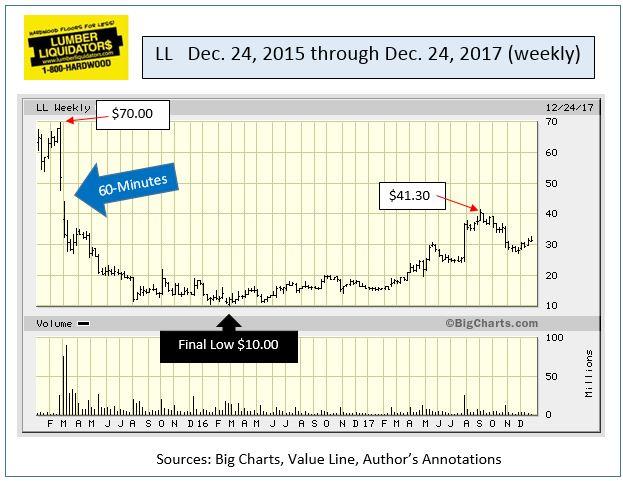 That company's long-term survival seemed in doubt when the 60 Minutes report aired. A few hedge funds, with disclosed short positions, were very publicly proclaiming that LL was going to zero.

A more recent 60 Minutes feature segment concerned itself with the FDA's opioid addiction crisis investigation. CBS focused on drug distributor McKesson (MCK) as a contributing culprit. In the wake of that broadcast, MCK shares, which peaked north of $243 back in 2015, briefly dropped to less than $134. 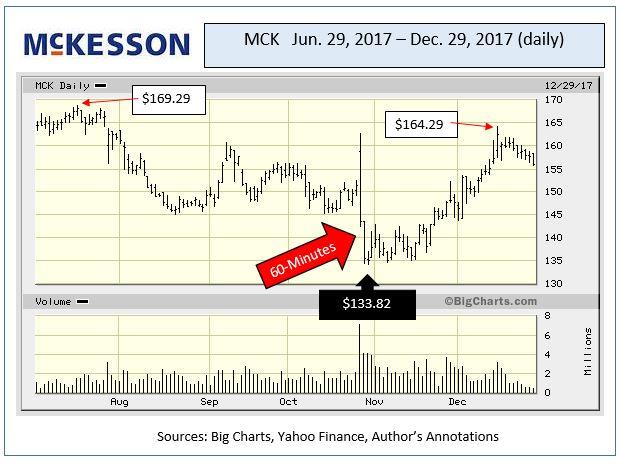 The problems described were never life-threatening to a blue-chip, large-cap firm like McKesson. As things turned out, MCK was able to pay a very manageable fine, make some adjustments and continue on its way.

60 Minutes, and some of its viewers, was outraged, leading to a second on-air blasting in December. MCK remains well below its old highs yet figures to post all-time record earnings per share in the fiscal years ending Mar. 31, 2018 and Mar. 31, 2019.

I smell an opportunity as the bad publicity fades away and fundamentals come back into play. McKesson gets Value Line's highest rank for financial strength. It is on pace to do about $215 billion in current year revenues. Its dividend is raised regularly, earnings are quite predictable and the stock has outperformed most of the 1,700 companies contained in Value Line's main research universe.

How does McKesson look based on its operating numbers? Very good indeed. At its Dec. 31, 2017 closing quote of $155.95, MCK sells for just 12.1x next year's expected EPS of $12.91. That's very similar to the valuations present at the stock's six previous "best buying opportunities" of the past eight years (green-starred below).

McKesson's average P/E since 2010 has run about 15.5x. That was typically accompanied by a current yield of around 0.78%. The stock is substantially cheaper than average on both measures right now.

A simple regression to the mean valuation on FY 2018's projected earnings would justify a rebound to about $200. That goal is more than 28% above the recent price and it's far from an upper limit. MCK traded between $214 and $243 during both 2014 and 2015 when sales, earnings and dividends were well below today's levels. 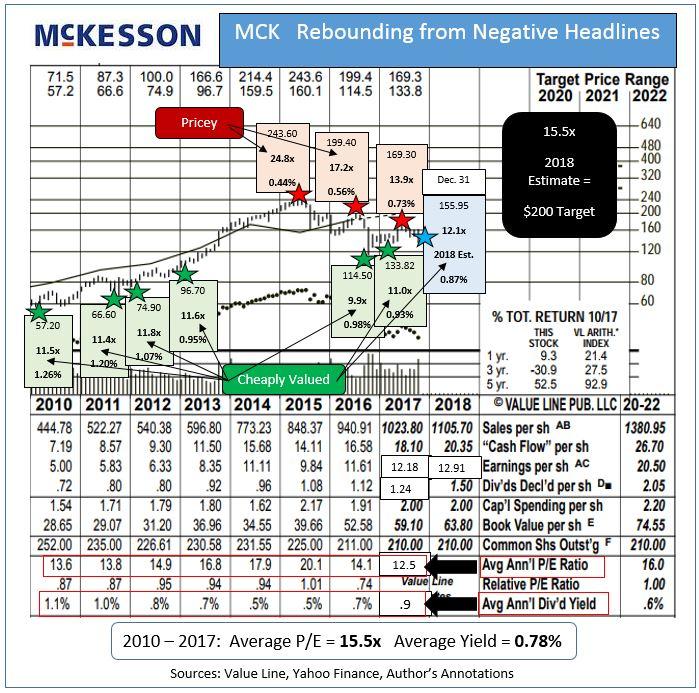 Don't just take my word on this. Independent analysis from Morningstar sees it pretty much the same way. They rate MCK as a 4-star (out of 5) but while noting the firm's wide moat and low P/E. Morningstar calls McKesson's present day fair value as $210. 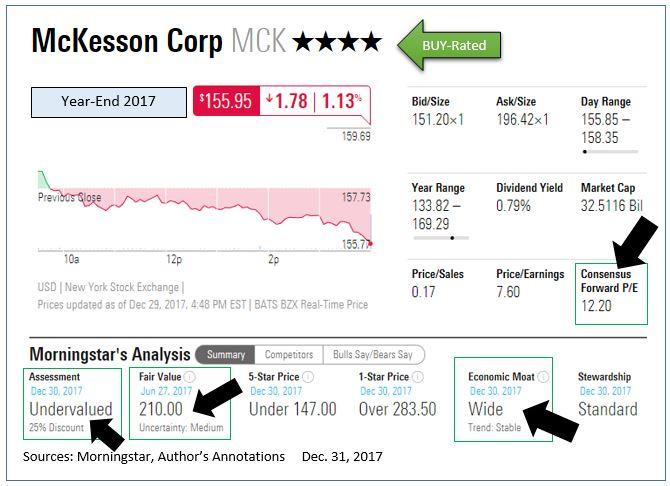 Standard & Poor's analyst Danny Yang has a hard-to-figure "Hold" ranking on MCK. What leads me to say that? S&P's computer-generated fair value score shows MCK in the highest quintile (most undervalued). It's fair value is pretty astonishing, coming in at $339.91 per share.

What's more, S&P apparently thinks MCK has bullish technicals and that it could more than double just by arriving at fair value. Yet the firm fails to assign it a Buy ranking. 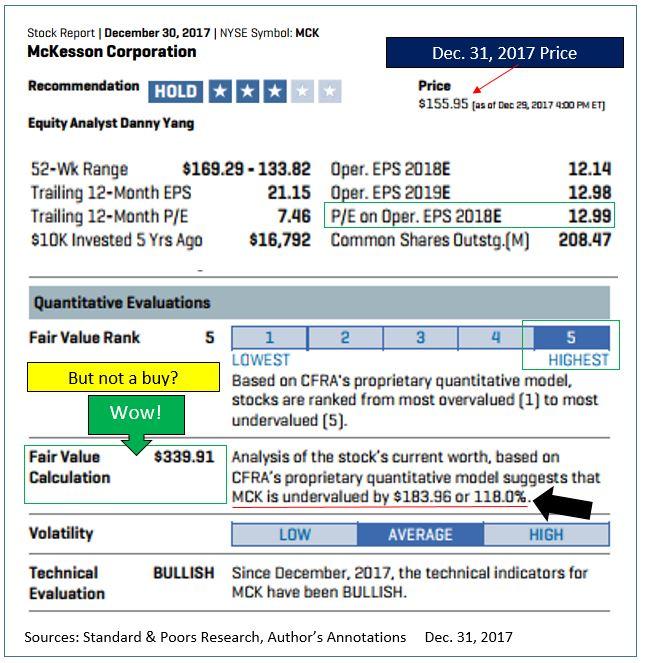 Standard & Poor's fair value viewpoint is not crazy, although it might take a bit of time to achieve. Value Line sees MCK potentially reaching the same basic neighborhood, but by 2020 to 2022. 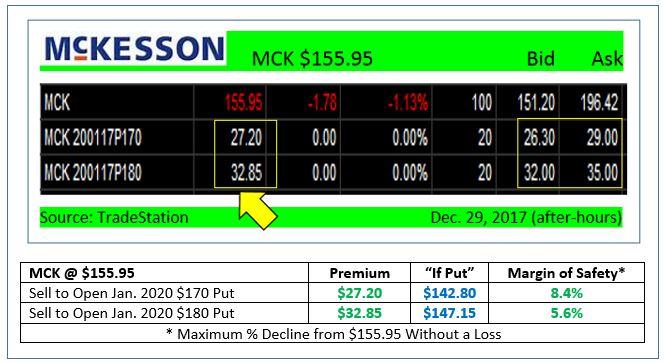 I'm betting that McKesson will be a star in 2018 and beyond. Buy some shares, sell some puts or consider doing both.

This column originally appeared on Jan. 3 on Real Money Pro, our premium site for active traders and Wall Street professionals. Click here to get great columns like this even earlier in the trading day.

Get an email alert each time I write an article for Real Money. Click the "+Follow" next to my byline to this article.
TAGS: Investing | U.S. Equity | Healthcare | Options | Stocks