Our last update on AT&T (T) was on Dec. 22, where we concluded "T has has a good rally this year and a good year-end rally. I am not bearish on T, but I am not very enthusiastic about its near-term prospects. A sideways trading range is more likely than new highs as we look forward to 2017." Since Dec. 22 T stalled and gapped lower today. Let's check our updated charts and indicators.

In this one-year daily bar chart of T, above, we can see a gap lower and probably a weak close. A weak close today probably means spillover selling on Monday or at some point next week. A test of the rising 200-day moving average line looks likely around $40. The 50-day average line is pointed up. The daily On-Balance-Volume (OBV) line moved up modestly in November and December but does not show that there was there was selling into the recent peak. Momentum confirmed the rally.

In this weekly chart of T, above, we don't have the current bar entered on the chart. Prices are above the rising 40-week moving average line and that strong longer-term trend may overshadow today's decline. The weekly OBV line is still pointed up and near the highs of 2016. The Moving Average Convergence Divergence (MACD) oscillator crossed into bullish territory above the zero line last month so that signal is also a plus. 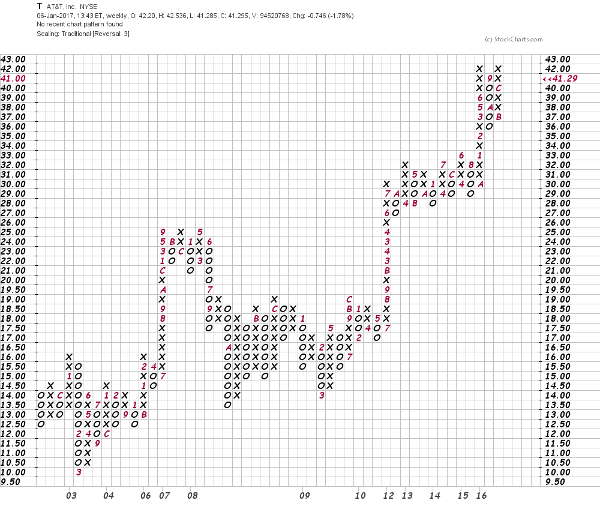 This long-term Point and Figure chart of T, above, is still in a bullish trend. A down column of Os would only happen if T declines to $39. A move to a new high of $43 on this chart would be a breakout.

Bottom line: Look for signs that the selling in T is drying up and then look for an upside reversal on the candle charts to go long. Add on a close above $44.

Verizon's Charts Set Up for a Classic Standoff

The giant telecom is flashing bullish and bearish signals, so it may be best to stand aside for now.