Here we are, the first employment report of 2017, and in a nutshell it was weaker than expected with 156,000 jobs created in December vs. the expected 176,000 jobs and upwardly revised 204,000 jobs (from prior 178,000) created in November. By sector the job gainers continued to be health-care, which is a positive for our AMN Healthcare (AMN) shares in the Growth Seeker portfolio, social assistance, and food services -- combined those three categories accounted for 60% of new jobs created in December. Other job gainers included transportation, financial activities, manufacturing and business services.

Stepping back, the big miss relative to expectations was on private-sector jobs, which came in at 144,000 in December vs. 198,000 in November. The even bigger realization was that the labor force participation ratio was little changed in December at 62.7 and was essentially unchanged during all of 2016. The same goes for the employment-population ratio, which once again hovered near 59.7%. Those figures put a sobering view on the media touting the final month of President Obama's term marking the 75th straight month that U.S. employers added jobs, the longest such stretch on record since 1939.

In our view, those payroll-to-population and employment-to-population figures help explain the angst that led to the election of Donald Trump, as well as the post-election optimism and hope for the economy. While we are all for hope and enthusiasm, it's never been a good move to invest based on those two things. As a sobering reminder, we have yet to hear the policies to be proposed by President-elect Trump, yet to know which policies will be passed and what the potential economic impact will be.

This report also tends to be volatile month-to-month, so we like to look at the 12-month moving average to get a better idea of the longer-term trends. From that lens we can see that new job creation peaked back in February of 2015 and has been trending downward ever since. Today the 12-month moving average is back to February 2014 levels -- not exactly painting the picture of an accelerating economy. 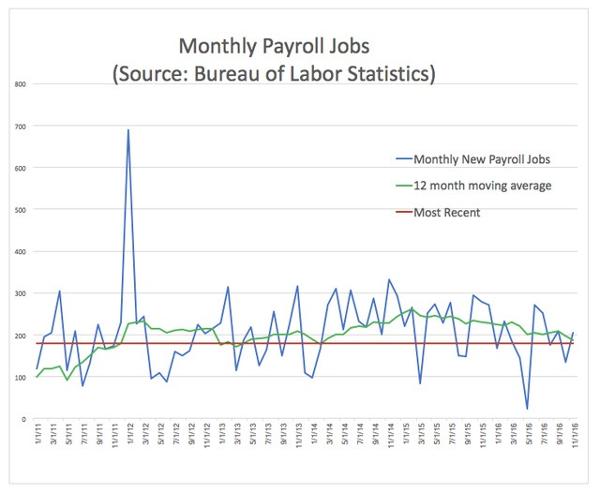 That uncertainty, along with the fact that we are caught between the recent end to 2016 and the start of December-quarter earnings season that begins in earnest before too long, means we are more or less in investing limbo.

Even so, we still have the question of the Fed.

Remember the Fed talked quite a bit about boosting interest rates over the last two years, yet has only raised once a year, and that means while the Fed may like to boost rates three times in 2017, odds are it will remain not only data dependent, but much like us waiting to understand the policies to be proposed by Trump and their impact.

So let's add or at least try to add some perspective to today's employment report. Earlier this week, we learned the manufacturing economy was on a stronger footing in December compared to November, per data from ISM and Markit Economics, but also per ISM the services economy slipped and ADP's take of December job creation was less than expected. Holiday retail sales were less than expected overall and in some cases, like we saw with Macy's (M) , J.C. Penney (JCP) and Kohl's (KSS) , it was far worse than expected -- or at least expected by some.

Putting it all together reminds us that despite the enthusiasm and hope that has overtaken the stock market about President-elect Trump jump starting the economy, we still have to navigate through the December quarter and most likely at least the first half of 2017 before his policies, whatever they wind up being, start to have an impact the economy. Given warnings from retailers, as well as cautionary comments from Honeywell (HON) , Adobe Systems (ADBE) over the potential impact of continued dollar strength in 2017, there are reasons to look at the recent market moves and think it has gotten a bit ahead of itself, with the forward price-to-earnings ratio on the S&P 500 at levels not seen since 2002, which was quickly followed by a 30% decline in the market.

If we get more of the same come the December-quarter earnings season, we could very well see the market pullback from current levels. Should that happen on the back of reset expectations, odds are stocks will be at much more favorable prices than now and that is likely to offer a buying opportunity.

Get an email alert each time I write an article for Real Money. Click the "+Follow" next to my byline to this article.
TAGS: Investing | U.S. Equity | Financial Services | Healthcare | Consumer Discretionary | Technology | Economic Data | Economy | Jobs | Stocks