Williams Cos. (WMB) has not been reviewed since early February, when we said, "A trade at $27.65 looks like it will give the bears the upper hand and could precipitate further declines. Bottom line: WMB has struggled to make new highs the past five months and the odds are slightly in favor of the bears. Longs should protect positions."

In the past eleven months since that report WMB has largely traded sideways and with hindsight it now looks like a break of $27.03 was needed to turn the chart lower. Prices have just now broken above their July peak setting the stage for still further gains. Let's take a closer look at WMB today.

In this daily bar chart of WMB, below, we can see that prices had a brief sell-off below the June lows in November but have since moved sharply higher. One of the drawbacks of moving average systems for generating buys and sells is "whipsaws" or false signals. In October WMB closed below both the 50-day and the 200-day averages but in December the stock was back above those two indicators of trend. The slopes of both the 50-day and the 200-day averages are now positive, something we have not seen since April/May.

The On-Balance-Volume (OBV) line was declining from August telling us that sellers were more aggressive but the line has improved since the middle of November. The trend-following Moving Average Convergence Divergence (MACD) oscillator has been in a bullish mode since early December.

In this weekly bar chart of WMB, below, we changed to a log chart to show some amplitude in the price movement. WMB is above the rising 40-week moving average line. The weekly OBV line shows improvement the past two months telling us that buyers have become more aggressive. It is hard to see the weekly MACD oscillator but it looks like it is turning up above the zero line for an outright go long signal. 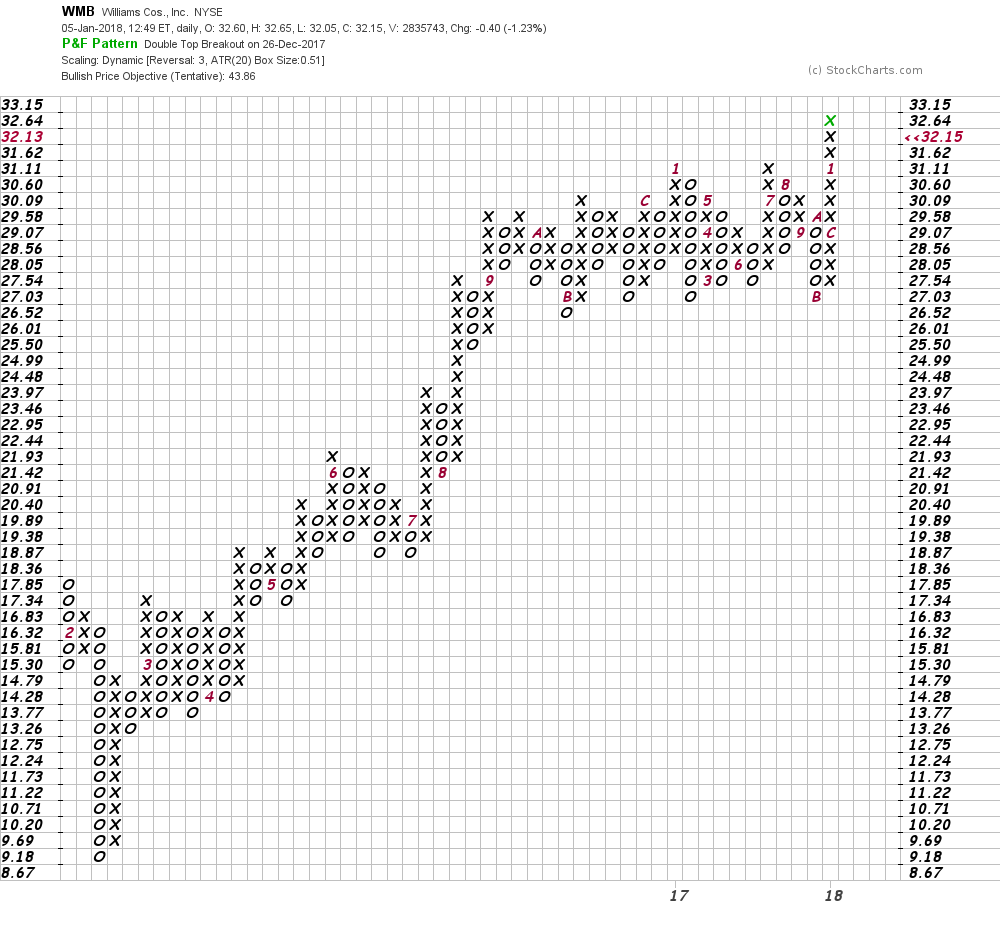 Bottom line: WMB is extended on the upside so traders should be careful in their buying approach. Buy a little here in case prices continue to rally but keep some buying power in reserve for a shallow dip. I would risk a close below $30.50 looking for gains to the low $40's.

Names in Gaming and Energy That Insiders Are Betting On

MGM Resorts International and Energy Partners are in unrelated businesses but have a spate of recent insider purchases in common.

Did Trump Just Pull an April Fool's Trick With the Oil Market?

The five best performing and worst performing stocks in the S&P 500 in the previous quarter pretty much tells the tale of the tape, so here goes.

Let's review the charts and indicators of XLE.

Have stories about today's prices and not tomorrow's supply/demand possibilities set the stage for a rebound?