The charts and indicators of Range Resources Corp. (RRC) have not been reviewed since early 2017, when we said that "RRC could continue to work lower to retest the $25 area. It will take a close above $37 now to break the eight-month downtrend line."

With 10 months of hindsight, we can see that RRC not only retested the $25 area it continued lower to around $16 this past month. Has RRC finally reached a level where investors may be returning to the long side? Let's check some updated charts and indicators.

In this daily bar chart of RRC, below, we can see that prices have been cut in half in the past year. In early August, we can see a change in volume as RRC declined quickly and sharply from $22 to short of $16. The trading volume spiked up to around 25 million shares, suggesting that some "throw in the towel" activity took place.

Prices stabilized in the second part of August and even firmed in September. It took three months for prices to retest the August/September lows, suggesting to me that there may have been some subtle scale down buying.

Since September, RRC has been crossing above and below the still-declining 50-day moving average line. While this price action can still be considered bearish, it is better than the February to July action, when rallies to the underside of the 50-day line failed.

Prices are still making lower lows and lower highs but that could change soon. The daily On-Balance-Volume (OBV) line has not made a new low since August -- another subtle positive.

In the lower panel of this chart is the 12-day momentum study. Downside momentum has improved or lessened since August, even though prices made a lower low in December. This is a bullish divergence and could be foreshadowing better price action ahead.

In this weekly bar chart of RRC, below, we can see that prices have really tumbled since early 2015. RRC is below the declining 40-week moving average line. The level of volume since August looks heavier than it was in the prior summer.

The weekly OBV line has been steady since August, suggesting at least a balance between bulls and bears. The trend-following Moving Average Convergence Divergence (MACD) oscillator crossed to a cover shorts buy signal in September. This indicator is still not in positive territory (above the zero line), but it is improving.

In this Point and Figure chart of RRC, below, we can see that a trade up at $18.49 will be a new high on this chart and could open the way for a further rally to the $23.16 area. 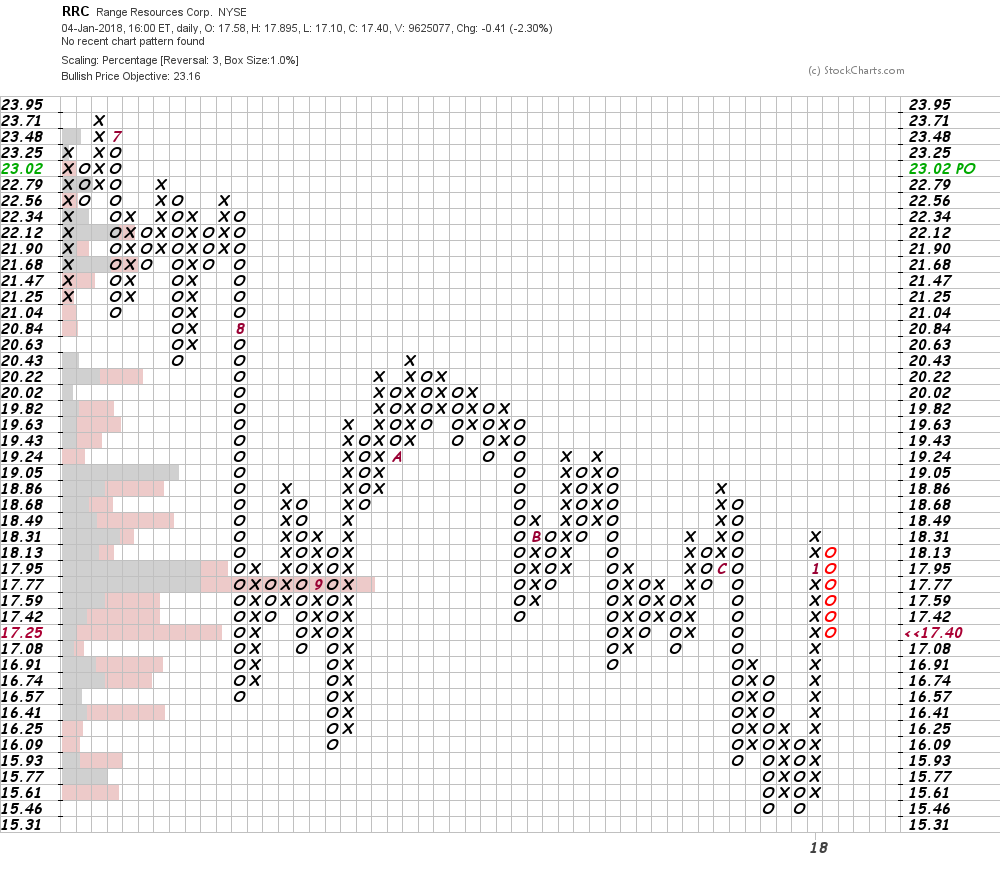 Bottom line: After a serious decline the past several years it looks like RRC is attracting interest from investors. Investors could probe the long side here risking a close below $15. Traders should be patient and wait for a close above $21 or the October peak before joining the long side.