"That's how you win -- pitching and defense." -- Derek Jeter

Let's get one thing straight. I don't give a rat's tail if the recreational use of marijuana is legal or not. It's not part of my world. That is, unless I can profit from it. Then I care a great deal. Medical use? Well, that I do care about, and I feel that to deny those suffering is truly immoral. After covering the impact of the legalization of recreational use of pot in the state of California just last week, the subject is back in the news.

Headlines circulated throughout the business world on Thursday that the U.S. Justice Department plans to rescind the Obama-era Cole Memo. This memo, that maybe you never heard of, is where the Federal government backs off from its approach as far as enforcement goes in states that have legalized the use of this drug. To date, eight states and the District of Columbia have legalized recreational use. Another 21 states have already legalized medical use. The states of Massachusetts and Maine are also close to legalization.

What do the people think? According to Gallup, 64% of American adults want marijuana legalized. What do traders think? Well, after this move by Attorney General Jeff Sessions, the ETFMG Alternative Harvest ETF (MJX) tumbled more than 6% on the day. Remember those stocks that I profiled last Sunday? I said that Scotts Miracle Grow (SMG) would interest me around $104, and Kush Bottles (KSHB) around $3.25? Well. I was banging around TV studios on Thursday. I missed those opportunities, but both of those names traded below those levels and rebounded by day's end, still well off from Wednesday's closing prices.

My favored play in last Friday's note was the biotech Corbus Pharma (CRBP) . This stock fell 1.7% on Thursday, which really made it an outperformer, thanks to the fact that this is not a recreational play at all. This stock remains above $8 support and below $8.60 resistance. Remember, we covered that. I still think you can get two bucks on this one, should it hold $8.60 at some point. The risk is, like with all revenue-losing small-caps, when the bills come due, dilution might become reality. This particular company is playing the game with almost no debt load, however, so I think (no promises) that you have some time there.

Yeah, this matters. Enforcement is likely to be left to state-level attorney generals. Not only are local governments that have already legalized the use of pot less likely to crack down on those buying and selling, but what AG would go after commerce in a tax-paying industry? Not a smart one. My conclusion? The trend is clear. The winners I choose may or may not be correct, but the space is not going away, and there will be winners. Selloffs like this present entry points if this is your cup of tea. Bigger headline than story, in my opinion.

Meltdown and Spectre. Oh, my. I remember when Spectre was simply what they called the bad guys in the old James Bond movies. First these vulnerabilities, particularly Meltdown, were problems for the semiconductor producing giant Intel (INTC) . Spectre is apparently a broader problem. Intel sold off on Wednesday, while most of the industry had a nice day. Advanced Micro Devices (AMD) , by the way, roared that day.

Then came disputed headlines that potential patches would slow down performance. INTC sold off. AMD roared. Intel executive Steve Smith spoke publicly: "We don't expect any financial implications around Intel's products". Huzzah. The stock then sold off again, then rallied into Thursday's close. Still seriously lower for a second straight day. INTC is down small in overnight trading.

A lot was made in the media over CEO Brian Krzanich's sale of a portion of his shares, but that sale had been scheduled way ahead of time, and I do not see a negative story there. Another story broke stating that several tech firms were notified of these vulnerabilities as early as last June. Is that negative? Hmm. I just don't know. I am a trader, and an investor. I am not a tech guy, What I do know, is how to defend myself.

I am long Intel, like much of the planet. Like many home-gamers. I pounded the table last year on behalf of this name. I added to the position more than once. This name has been good to me, among my book's top performing names for 2017. I suspect the same is true for many of you.

My belief is that when you are sitting on giant gains in a name such as this, and especially when that name heads into a period of uncertainty, one must take some action. Sure, you could just buy put options as insurance. I hate buying options. I have told you that many times. All that does, much of the time, is increase your effective average point of entry. Who the heck needs that?

You could throw a stop-loss order out there. That is a somewhat effective strategy, but is not creative, and smacks of fear. Just don't forget it's out there. A trailing stop almost insures that some creepy algorithm will identify your order, and make you feel like you have just been picked off. I will tell you what I did, and what actions I am likely to take after looking at the chart.

First, I took 30% off of the top at the first sign of possibly sustained trouble. I put that money into Macy's M for now, as I liked its same store sales and the stock reacted irrationally. That is not, however, part of this story. On to the chart.

Chart of the Day: Protecting Intel

Alright gang, this is where we buckle our chinstraps and earn our keep. Money Flow looks positive. That's the only nice-looking item on this chart. Throw it out.

See the Pitchfork? Was working well. Looks broken now. 50-day simple moving average (SMA)? Broken too. News events will do that to you. You know what looks like it's not broken? Those blue Fibonacci levels that I threw up there.

See that intra-day rebound that INTC experienced on Thursday? Right at (or close enough to) a 38.2% retracement of the move from the August low through the December high. Conclusion here? $42.50 could be the gateway that allows for considerably lower prices should these stories persist, and the level crack. 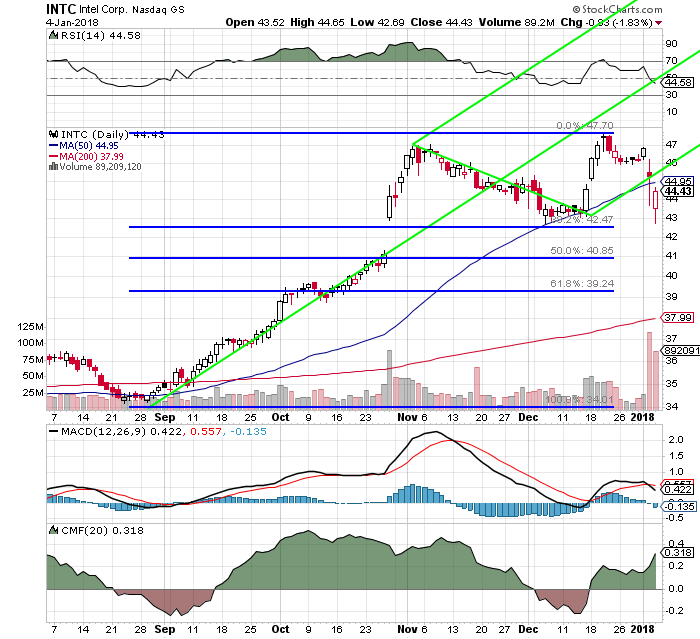 Intel is expected to report fourth-quarter earnings after the closing bell on Thursday, Jan. 25. Wall Street consensus is looking for about $0.86 on roughly $16.3 billion. The firm earned EPS of $1.01 for the third quarter, on expectations of just $0.80. That was on revenue of $16.1 billion. The actual data here will likely matter less than how the firm presents itself and what they project for 2018. The already mentioned issues will be front and center.

Knowing this, we will walk through an example of how a retail investor might protect his or her long position. Let's say the investor owns 100 shares for the sake of convenience. First, we are going to marry a put to that long. Sarge! I thought you said you hated buying options? I do. Hear me out. The chart tells us that $42.50 is possibly a breaking point. Jan. 26 (one day after earnings) $42.50 puts went out last night at $0.64. So, you are adding $0.64 to your average price if you do this alone, but it does protect you for three weeks.

Now, we are going to cover the same 100 shares with a call option. We will sell (write) the Jan. 26 $46.50 calls. They went out at $0.66 last night. This replaces the money that you spent on the puts. You have only lost commission on this transaction based on these prices. Now you have downside protection for three weeks, but have limited your profit for those same three weeks that happen to cover a quarterly earnings release. What do you care about to a greater degree right now? If you have to sell the shares at $46.50, that is still darned close to a millennial high.

Get an email alert each time I write an article for Real Money. Click the "+Follow" next to my byline to this article.
TAGS: Investing | U.S. Equity | Healthcare | Technology | Markets | How-to | Options | Stocks

Here's the Level to Zero In on for UnitedHealth Group

Shares of the diversified healthcare company have held up fairly well despite the decline in the broader market but soon could be put to the test.

Within the next 15 years, people 65 or older are expected outnumber those under 18, for the first time in U.S. history.