It has been a while since we looked at Chesapeake Energy Corp. (CHK) . In late February last year we reviewed the landscape for CHK, and we wrote, "the $5.50-$5.00 support area is the chart point to watch now. A close below $5.25 puts the bears back in control. A close back above $6.75 is needed to put CHK back in a position to retest the September and December highs."

Looking back at the price action today (first chart below) we can see that the bottom of the $5.50-$5.00 support area was broken and CHK slide still lower but it has been finding fresh support around $3.50 in recent months. Is CHK getting its house in order or should we continue to avoid this name? Let's check out the latest charts and indicators for clues.

The On-Balance-Volume (OBV) line was in a decline from January to the end of August telling us that sellers of CHK were more aggressive. Since early September the OBV line has been flat with some improvement seen in November. A rising OBV line would be better but at least we can see that the bears are not being aggressive. In the lower panel we can see a pattern of higher lows from the momentum study since August. This is a bullish divergence when compared to the price action making roughly equal lows. This divergence may be foreshadowing stronger price action in the weeks ahead.

In this weekly bar chart of CHK, below, we can see a two-year sideways to lower chart pattern. Prices are below the flattening 40-week moving average line. The weekly OBV line has been weak the past 12 months but shows a small uptick in the past month. The Moving Average Convergence Divergence (MACD) oscillator has been improving since September but is still below the zero line and an outright go long signal.

In this Point and Figure chart of CHK, below, we can see a possible "triple bottom formation". A trade up to $4.20 will help and strength to $4.28 is even better. The chart shows a possible upside price target of $4.49 which is encouraging. 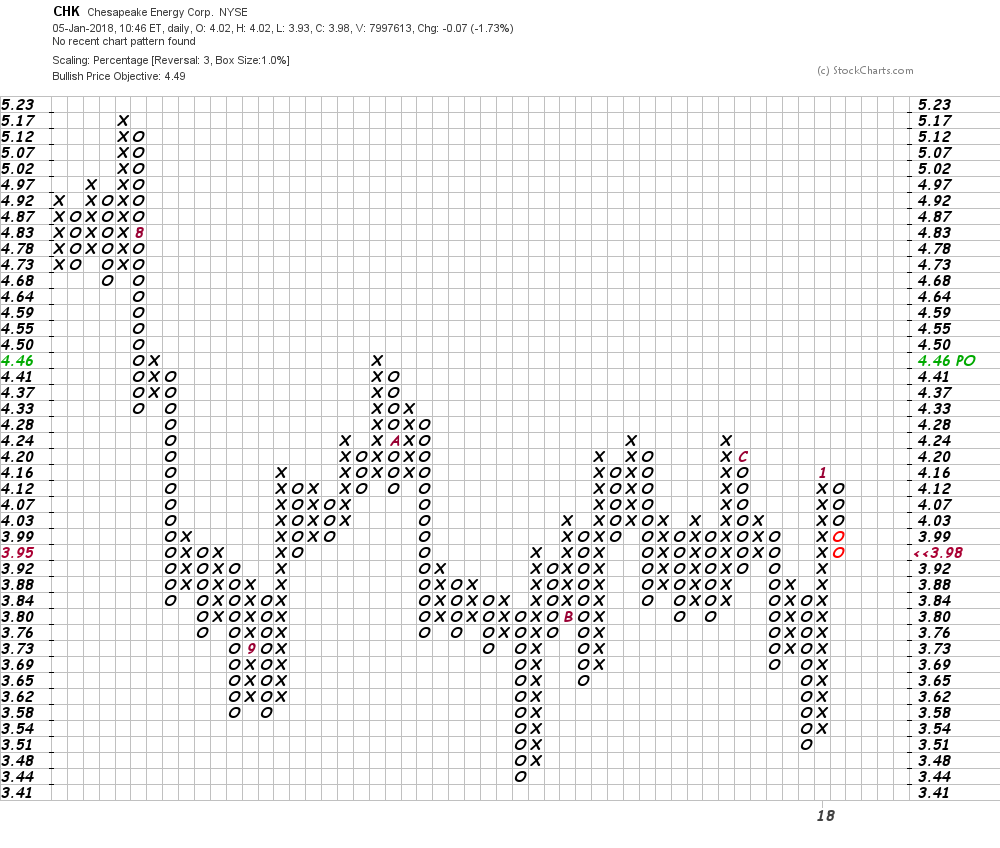 Bottom line: The chart of CHK looks promising but it's early in the game. Patient traders could buy strength above $4.50 and then risk below $4.00.

Get an email alert each time I write an article for Real Money. Click the "+Follow" next to my byline to this article.
TAGS: Investing | U.S. Equity | Energy | Healthcare