In April 2016, the intermediate trend of TJX Cos. (TJX) turned sideways within a longer-term uptrend. Key support at $72 is the level to watch to see if this sideways market continues or if a new downtrend begins in the weeks ahead.

In this daily chart of TJX, below, we can see how buyers have shown up around $72 in May, June and November. Sellers have shown up around $80, but there was a temporary rally above $80 in July and August. Action Alerts PLUS holding TJX is testing its 50-day and 200-day moving averages, and the outcome could determine the next move for this name. Prices closed above the rising, 50-day average last night but stopped at the underside of the now-declining, 200-day average line. A rally failure now followed by a new low for the move down from the November high could put prices in position to retest the $72 support area.

The performance of the On-Balance-Volume (OBV) line could be key to the direction of TJX in the next few weeks. The OBV line turned lower in mid-August, and only had a very modest recovery in November and December. Renewed weakness in the OBV line would suggest that sellers of TJX had become more aggressive, with heavier volume of trading on days when the stock closed lower. Stronger volume on a "down day" implies that traders and investors are showing urgency to get out of longs.

In the bottom panel is the momentum indicator, and it is not showing us a bullish divergence as prices decline in December -- the pace of the decline has not slowed. Let's see what is going on with the longer-term chart.

In this three-year weekly chart of TJX, above, we can see the rally from mid-2014. Recently, TJX closed below the flattening, 40-week moving average line. Now look at the middle panel with the weekly OBV line. The OBV line has made a lower high in November, and a break of the October low would put the OBV line in a downtrend and show that sellers were more aggressive on this timeframe. The MACD oscillator in the lower panel looks like it can weaken below the zero line for an outright-sell signal. 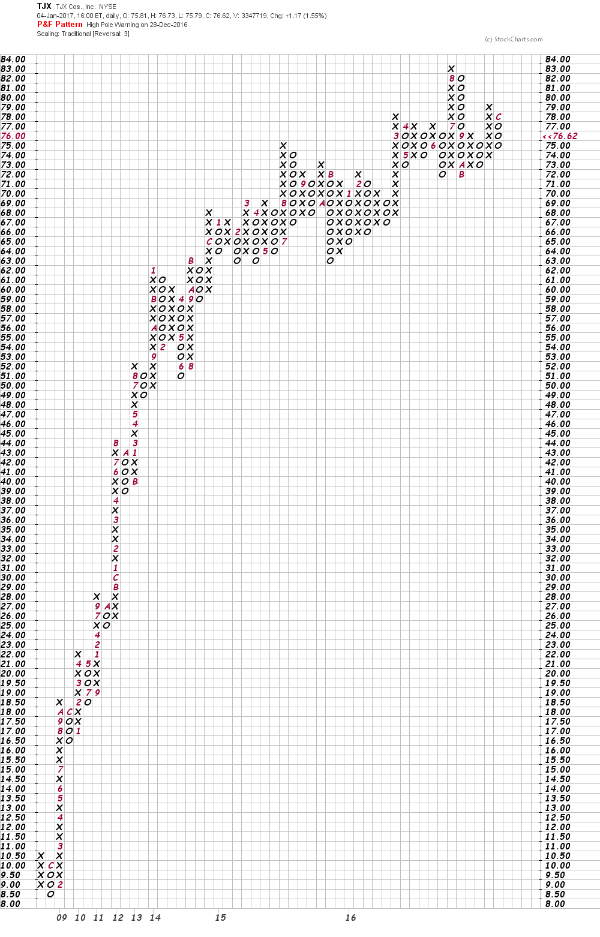 In this Point and Figure chart of TJX, above, we focus on just the price action. This chart shows both the uptrend and the sideways-to-higher trend. Here, too, the $72 level is key, and a break of $72 with a trade at $71 will turn the chart bearish.

Bottom line: Traders and investors in TJX need to be aware of the trend and how a break of $72 could change the trend to down.