We looked at Walgreens Boots Alliance, Inc. (WBA) a month ago, and we wrote this: "the charts of WBA present a tough call. The late October low seems like it should hold, considering the increased volume seen, but new accumulation is not presenting itself in the typical ways with a rising OBV line and stronger moving averages. With a significant band of overhead resistance, I suspect that WBA will need to trade sideways between $66 and $76 for some time before attempting a sustained upside move."

With WBA trading lower this wintry day a fresh look at the charts is in order. In this daily bar chart of WBA, below, we can see a gap to the downside and a sharp move lower. WBA is still above the rising 50-day moving average line but it looks like this indicator could get tested soon. The slower-to-react 200-day moving average line remains in a downtrend.

The daily On-Balance-Volume (OBV) line has risen with prices from late October which tells us that buyers of WBA have been aggressive the past two months. The Moving Average Convergence Divergence (MACD) oscillator has been above the zero line the past month but could turn lower to a take profits sell signal.

In this weekly bar chart of WBA, below, we can see that prices have rallied the past two months but have stopped short of the declining 40-week moving average line. The weekly OBV line is "interesting" in that it moved sideways to lower in a jagged fashion for much of the past three years but rocketed straight up the past two months. Assuming the move up in the OBV line was aggressive buying then, how are they going to react to the price weakness today? If I was long WBA I would be nervous. The weekly MACD oscillator crossed to the upside last month for a cover shorts buy signal but how long that lasts depends on the price action the next few weeks.

In this Point and Figure chart of WBA, below, we can see the down column (O's) and that a trade at $69.45 could precipitate further weakness. A rally to $75.96 is needed to refresh the rally but there looks to be plenty of overhead resistance in the upper $70's. 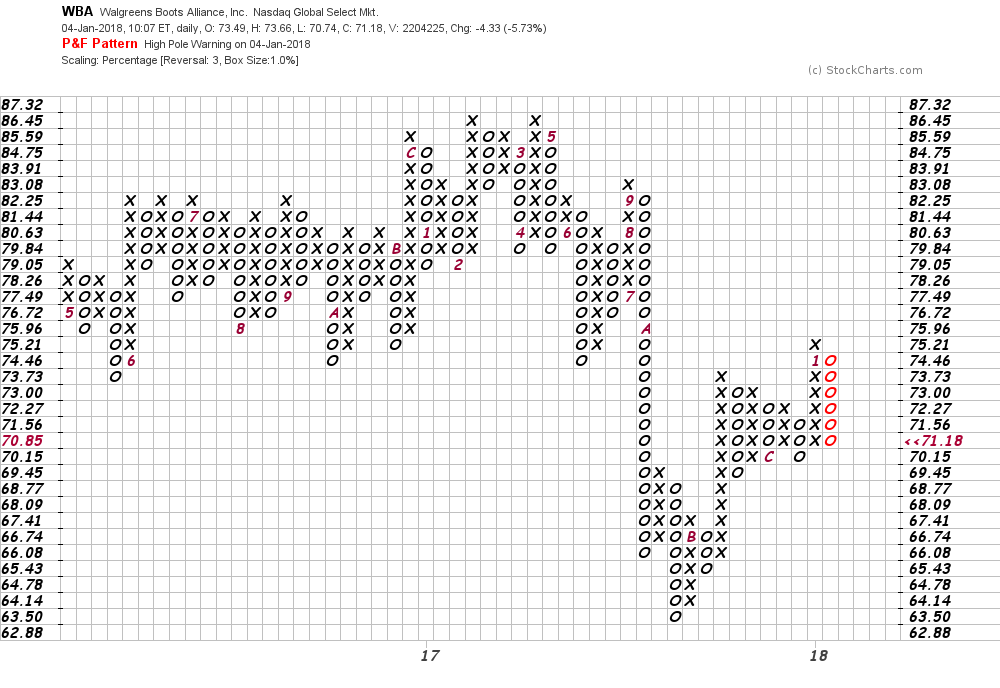 Bottom line: If WBA closes below $69 we could see a retest of the October lows around $64 and a close above $70 -- the 200-day moving average line -- may be needed to turn the chart of WBA bullish.

I'm Dipping a Toe in Invitae

A close above $18 would go a long way towards making breakout buyers feel better.