I have done this for many years, mostly on the down-low. I have had some success, and some failure as well in picking a stock that one thinks will provide a year of runaway profits. In reality, I am more likely to try and add when I think a stock is unfairly unwanted, and lighten up when such a stock either runs through my target price, or appears to reach levels where maybe it should not. Picking one stock as a favorite at the start of a calendar year is difficult but it sure is fun to try.

This year, we have the difficulty of dealing with both the impact of tax reform on the marketplace as well as the economy, and the expected slow withdrawal of liquidity from the very same economy by the Federal Reserve as the central bank tries to simultaneously raise interest rates while whittling down their balance sheet. Tax cuts should come to the aid of a sector such as energy, and higher interest rates should improve banking conditions dependent upon the long end of the yield curve. Growth should speed things along for the transports. Last year's darlings, the tech sector, seems to be at the ball without a dance partner.

While it is true that conditions may not improve for the information technology sector based on these changes in the financial environment, tech remains where it is at, gang. This has been the case, pretty much since the cows came home, and you know what? I don't think any of these other business lines are going very far unless they rely on ever improving technology to be competitive in their fields. I will dance with all of my favorite sectors... as I always do, but my last dance.... my last dance will still be saved for technology.

Ever hear of these guys? Sure you have. Not quite as large as my 2017 fave Lam Research (LRCX) . Not quite as well known as another name that I am long, and almost went with... Applied Materials (AMAT) . My pick (for now) is KLA-Tencor (KLAC) . I am not long the stock as of yet. I will be after this article is released to the public for a few hours. Why do I like this business? Let me count the ways. First, though, what does KLAC do?

Warning: If you have a short attention span, skip this paragraph. KLA-Tencor is a supplier of process control and yield management solutions for both the semiconductor and nanoelctronics industries. This firm supplies both products and services to firms that manufacture bare wafers, integrated circuits, lithography reticles, as well as disks. The firm's offerings... are you ready for this?... include Chip, Wafer, Reticle, LED, Power Device, Compound Semiconductor, and Micromechanical Systems manufacturing. Got all that? Oh, they also provide general lab applications, and service all of these product lines. Yeah, if somebody asks you, I guess you can say that they make stuff that the semiconductor industry needs.

Like I've already said, the economy is going nowhere without tech. Big Data, Machine Learning, Artificial Intelligence, Cloud Services, Autonomous Vehicles, and even Gaming. All important ... important to commerce in a growing economy. I almost went with Applied Materials given their ample backlog of orders, and their lower price point going into the year. I think that stock will also do well, and got in on the recent selloff.

KLAC is currently trading around $107.75, well off of recent highs, but was still up 37% in 2017. A lot to ask that 2018 is just as kind. I am going to ask. The firm shows aggressive revenue growth, up 29.2%, year over year for the September quarter, reported in October. Second-quarter earnings are due on Jan. 25. Wall Street is looking for about $1.72 on another $960 million-plus in revenue. Market capitalization stands at $16.8 billion. The stock trades at around 16.6 times trailing earnings, and a very undervalued (in my opinion) 14.4 times forward looking earnings. The industry average is up around 29 times... just sayin'. There's more to like.

Almost forgot to mention that the firm pays a decent dividend for a high-priced stock. They currently pay you 2.2%, or $2.36 annually just to own the shares. On top of that, outside of a special dividend in 2014, the last year that this firm did not increase their normal payout was 2009.

There are two risks to this trade that are quickly identifiable. The most obvious of these would be peak and past peak pricing for memory. Cap-ex for NAND is expected to lag into 2018. However, Cap-ex for DRAM is looking a bit better, maybe an increase of as much as 9%. Remember, DRAM is 1,000 times faster than NAND, is more durable than NAND but it is also cheaper than NAND. DRAM also needs power to save data.

The development of memory and how it prices are what could produce a continued boom, or the subsequent bust. Am I afraid? Of course not. All of my eggs will not be in one basket.

The second risk to the firm's equity valuation, and perhaps the reason why the P/E ratios trail their competition is the debt load. It's kind of high... like $2.77 billion high. Not to worry, in my opinion. The firm has cash and cash equivalents on hand of $3.06 billion, and both the Current (3.11), and Quick Ratios (2.55) are at levels that illustrate a clear ability to cover short-term obligations. 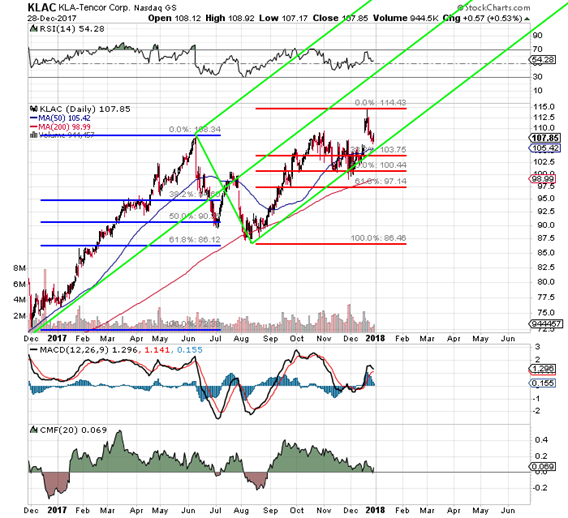 I went back to start of December 2016 in order to capture a more complete picture of year 2017, and what led into the year. As of late, the stock has sold off. Money flow, still positive, has tapered off. The daily MACD looks like it might just give you a bearish cross-over in the short-term. That is fine if you are running a marathon, and looking for a point of entry. The stock is clearly not overbought.

The beauty of this name is just how well it obeys the levels that you would expect to provoke reaction. The blue Fib levels illustrate an almost precise 50% re-tracement before getting back on track. The red Fib levels coupled with that daily MACD indicate, at least to this guy, that an interesting spot for me to initiate with somewhere between 10% to 20% of my intended long could appear just below 104.

The green Pitchfork model that identifies the trend also illustrates that for several months now, the lower and central trend lines have held firm. You know the guys who write the algos... they look at the same charts we do. That's why trading levels are so much more accurate now than they were when humans were in charge.

Price Target: I really don't like going out a year on these things, but $150 is realistic, and could happen a lot sooner than 12 months out.

Panic Point: No reason to panic if you leg in small.