"A writer should have the precision of a poet and the imagination of a scientist." -- Vladimir Nabokov

Currently, paper is strewn all over my desk. Paper is all over the floor of my office. My white board is covered with my many unrelated markings in different colors. My cork boards have no room left. There are a few pins left, but no room. I wrote a lot last night. Am I mad? How would I know? I have been banging away at this aging laptop while most of you were still dreaming sweet dreams.

First, I wrote about the FOMC Minutes. Know what? They might as well be the minutes from a random meeting from several years back. They don't matter. 2017 was different. Then I wrote about gold. Everyone likes gold. Well, almost everyone. I like the recent move higher there. How much of that is real, and how much is dollar weakness?

I started to write about the semiconductors. Heck, I am long many of them. Trade ideas come easy there. Thank goodness. Though not a tired story, I do go there often enough. Then, I talked with my editor. Smart kid, that guy. He suggested trying to find a way to profit from this lousy weather. Eureka. Bells went off, and choirs sang. Ideas flowed into my somehow still functioning brain, and we were off and running.

It hasn't been easy. Frigid temperatures have gripped much of North America for what seems like ages at this point. Really. It is winter. Snow is falling outside my office window this morning. Out here, we are looking at maybe a foot of the white stuff. This weekend, a much deeper freeze is expected to settle into the region. Still, Natural Gas has struggled to go anywhere.

Still, as most other commodities bask in the glow of dollar weakness, and the U.S. manufacturing base experiences renaissance, Natural Gas struggled to go anywhere. There is just so much of it, even as Chinese consumption grows. By the way, the weekly inventories data are expected today at 10:30 ET. We are looking for a draw of 220 billion cubic feet, the largest weekly draw in a year.

On Monday, more natural gas was burnt in a nationwide effort to stay warm than had ever been burned off in a single day. That's right. Ever. We may be a bunch of softies now. OK, there's no maybe about that. The point is that domestic consumption is experiencing an unforeseen pop. Americans cut their way through 143 billion cubic feet of this stuff on New Year's Day. Natural Gas futures for February delivery bottomed out in the low $2.60s in late December. This week, that contract has been trading above $3, and has survived two severe tests of the level from the upside. Is there a trade here, gang?

You all know how I feel about Apache Energy (APA) . This is a stock that I believed strongly in from early to mid-2017. I dug in, and it took almost all of whatever talent I do have, plus a whole bunch of luck, to manage this position.

The name became a very positive performer within my book. That took a lot of nurturing, but the name is trading just about where I have been selling it over the past five months or so. Is this where it breaks out?

Perhaps there is a better Natural Gas play than Apache -- which, by the way, is a holding in the Action Alerts PLUS charity portfolio that Jim Cramer co-manages. Maybe you don't want to play Natty Gas at all. Let's explore.

You have heard of the alternatives. Range Resources (RRC) has worked its way higher over two weeks' time. So has Chesapeake Energy (CHK) , which is cheap enough per share to speculate on. That said, both of these names find themselves in unenviable short-term debt situations. Both sport ugly current ratios, and even uglier quick ratios. You can do what you want. These two are not for me.

Cabot Oil & Gas (COG) is a better alternative, in my view. This firm has a much more compelling chart, a much more comfortable debt situation, and positive levered cash flow. That's something that you do not have with both RRC, and CHK. I still like APA. Heck, I've stuck with the stock, and it has worked.

Apache pays the best dividend among this group. COG did just boost the dividend yesterday after agreeing to sell $765 million worth of Eagle Ford Shale assets in late December. In my book, the Natty Gas play comes down to APA and COG. Let's hit the charts on this.

Charts of the Day: Apache vs. Cabot

What jumps out immediately on this 16-month daily chart of APA? That's easy. The regularity and predictability of the trading range experienced by this name from August right in into the present. This is how I buttered my bread and fixed my long position in this name. 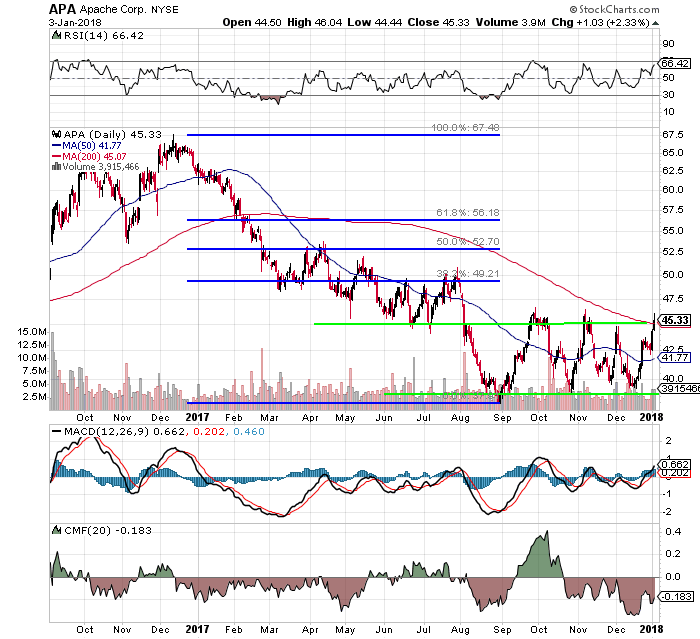 It really is amazing how easy the algorithms sometimes make this game for human traders who are still paying attention. Believe me, the guys reliant upon the algos have lost their focus. They are reading about the Rangers and the Knicks while we hide in the weeds and eat their lunch. They don't even notice us. The game has become too easy for them to work hard. We can, and will, defeat them. That trade-able range is outlined by the green trend lines.

Can APA break out this time? I have been slow to make the sale this time around. WTI Crude, and Nat Gas are undeniably moving into a better price range -- well, oil is, anyway. Our basic Fibonacci levels suggest that a break and hold at this $45 level allows for movement to the $49/$50 area.

You can easily see that this level has served as a pivot and then resistance from March through the end of July. The algos will see this, too. You are working with a positive-looking moving average convergence divergence (MACD). The name is not overbought. Money Flow is not yet positive, but something else is. The last three upswings toward the $45 level have all been accompanied by increased trading volume. Does that matter? It does to me. My discipline demands that I consider selling some here. My discipline also insists that I hang on to most of my long.

Just look at this trend in Cabot Oil & Gas! Intact since way before Nat Gas was cool again -- all the way back to the national election in 2016. Like APA, the name is not overbought. Money Flow is more volatile, and appear to be currently attempting to cross into positive territory. MACD is positive. The name experienced a golden cross in April that appears to have worked for this stock in text book fashion. 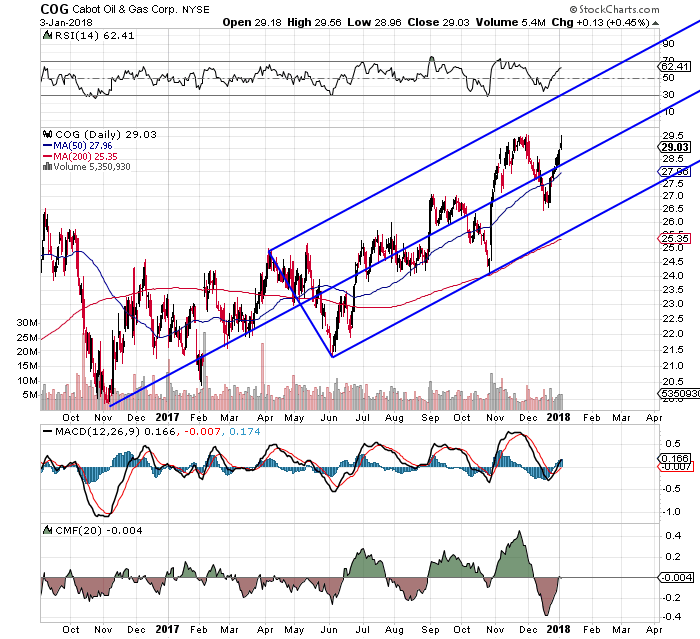 Could this trend stay whole? It has for 14 months, and we have a lot of winter left. The suggestion is that the central trend line could hit $30 by the end of the season. There has been a repeated pattern of moves between $1.35 and $2.0 from that line. You can currently sell (write) a Feb. 16 $30 Straddle for close to $2.50, which could potentially approach worthlessness by the time expiration rolls around. Yes, this exposes you to the risk of the market. Equity risk! You can avert that by buying back the side gone wrong at the first sign of a broken trend. If you are not the kind of trader who has the time to focus on each position, then this kind of trade is not for you.

Get an email alert each time I write an article for Real Money. Click the "+Follow" next to my byline to this article.
TAGS: Investing | U.S. Equity | Energy | Markets | How-to | Risk Management | Stocks