This is my first time taking a look at Energizer Holdings Inc. (ENR) from a technical perspective. A quick glance at the daily bar chart (below) shows a possible double-bottom pattern in August-November, but let's dig deeper and see what the risks and rewards look like before plugging in.

In this daily bar chart of ENR, below, we can see a decline from April to August with prices dropping from $60 to the $42-$41 area. ENR made a recovery rally to $49 by the middle of October and then retreated to retest the August low. Prices held in November and have since broken above the October peak. I have just described a possible double bottom. ENR is above the rising 50-day moving average line and testing the underside of the still declining 200-day moving average line.

The volume pattern (right below the daily price chart) shows heavy volume at the August low and the November low. The On-Balance-Volume (OBV) line followed prices lower till August but has improved modestly. It would be a positive signal if the OBV line moved above its October peak. The trend-following Moving Average Convergence Divergence (MACD) oscillator moved above the zero line in late November but it has weakened and is telling us to take profits on longs.

In this weekly bar chart of ENR, below, we can see that prices are testing the declining 40-week moving average line. The weekly OBV line looks stronger than the daily chart and that is positive. The weekly MACD oscillator has been rising since August and is close to crossing above the zero line for an outright go long signal on this time frame. 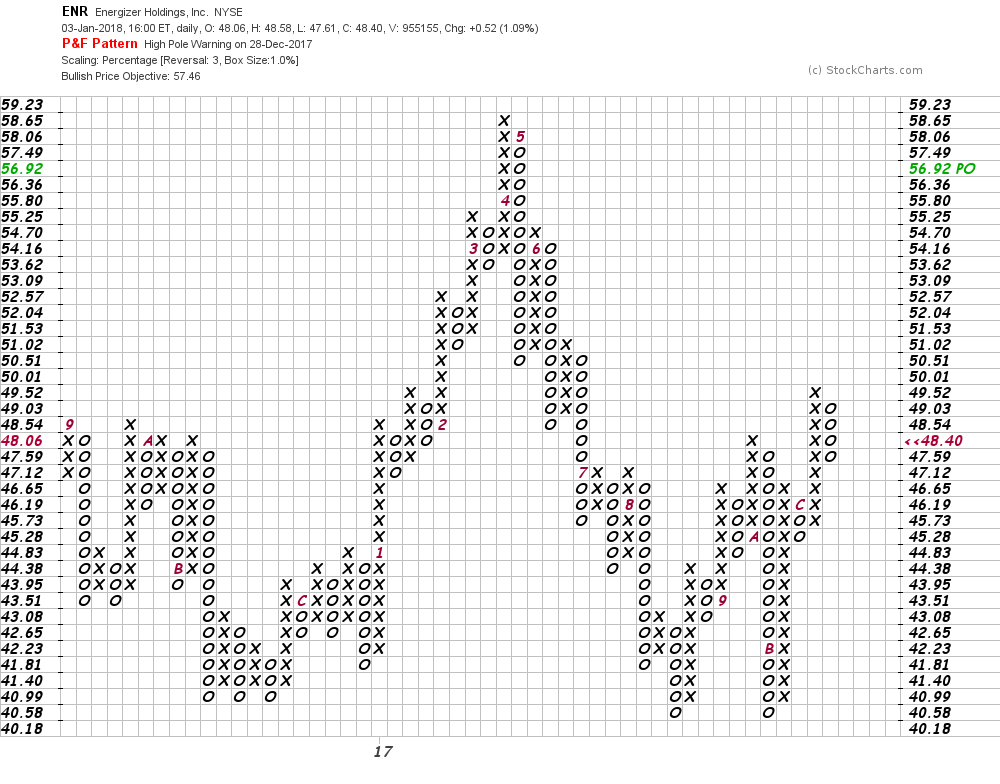 Bottom line: Traders could approach ENR from the long side at current levels risking a close below $45 or on a close above $50 risking below $46. My upside price target is $56.

Get an email alert each time I write an article for Real Money. Click the "+Follow" next to my byline to this article.
TAGS: Investing | U.S. Equity | Consumer Staples | Consumer | Stocks

Let's Hash Out What's in Store for Hormel Foods Stock

Our latest technical analysis and trading strategy on the maker of Spam and Skippy.