The U.S stock market had another good year in 2016. The three major market indices were up between 10% and 15%, respectively. The election of Trump provided a strong finish, but overall the markets appeared to be headed for another positive finish.

Unfortunately, the same cannot be said for many actively managed funds. Many active funds struggled to deliver a positive return in 2016. Many more could not outperform the market indices, and it was a small minority that can claim besting Mr. Market in 2016.

When you consider that almost all actively managed funds take between 2% and 4% in management fees and fund expenses, beating an index fund that charges 0.50% or less seems like a battle destined to lose.

Our approach has simply been built on the view that in order to beat the market, you cannot be the market. We focus on intelligent diversification, not over-diversification. We are patient. And we keep expenses minimal. 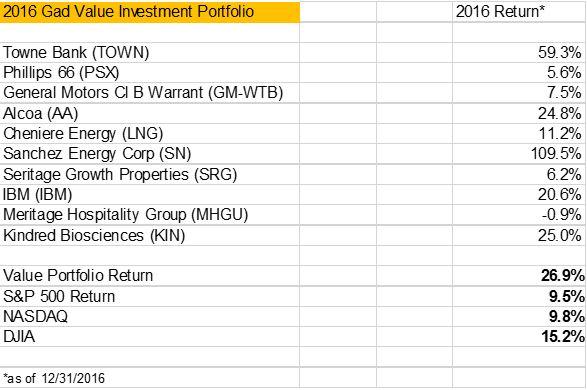 For those who have followed our portfolio, we began this endeavor in 2012. The rules were simple: 10 equally weighted securities each year regardless of size, geographic location, or industry; no change to the group of 10 for the entire year, unless we discovered some sort of fraud or dishonest behavior.

I've also stated that one year is not an indicator of long-term investment performance. 2016 was a year where a dart-throwing monkey had a chance to beat the S&P. Below are our results since 2012. 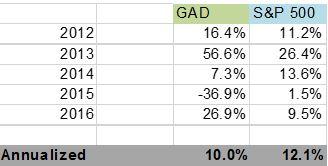 The 2015 year was painful, as those losses were magnified by having three securities tied to energy. As such, our annualized returns are two percentage points below the S&P for the five-year period. However, we are confident that the lessons learned in 2015 will get us ahead of the S&P in years to come.

I suspect outperformance is going to get a bit tougher in coming years, given the continued run up in stock prices. Yet our approach will remain unchanged: choosing assets and operations that are priced attractively to accomplish our ultimate goal, the preservation of capital.

Get an email alert each time I write an article for Real Money. Click the "+Follow" next to my byline to this article.
TAGS: Investing | U.S. Equity | Markets | How-to | Risk Management | Stocks