You should worry if your airplane begins to stall. It is also a red flag if your stock stalls out on rallies. The outcomes can vary widely depending on the skill of the pilot and the trader but the important thing is to be prepared and watch for subtle clues. The stock of American Airlines (AAL) has stalled around $54 several times since July (see the chart below). Is this a temporary ceiling or should we tighten our seat belts and get ready for something more serious? Let's inspect the charts and indicators.

In this updated daily bar chart of AAL, below, we can see can see that the price of AAL has made higher lows from March to August to November but prices have not moved higher than the peak set in July. Some chart watchers could suggest that the chart pattern playing out since July is a large bullish triangle. With prices close to where the apex should be we should be an upside breakout could happen soon but I do not agree with that observation. Typically, the level of volume dries up during a triangle as the price swings get narrower and the opportunity to make money shrinks.

Prices are above the flat 50-day moving average line and above the rising 200-day line. The On-Balance-Volume (OBV) shows an "uneven" performance -- a decline during July into September; a small recovery into October, another decline followed by a positive trend the past two months. The Moving Average Convergence Divergence (MACD) oscillator is above the zero line but it is poised to cross to the downside an a new take profits sell signal.

In this weekly bar chart of AAL, below, we can see that prices are above the rising 40-week moving average line. The volume pattern has been shrinking since April. The weekly OBV line is mostly neutral and the MACD oscillator just turned up for a fresh buy signal.

In this Point and Figure chart of AAL, below, we can see that we have a price target of $55.05. This would be a fresh breakout should it occur and would probably precipitate further gains. A decline to $48.54 would weaken this chart. 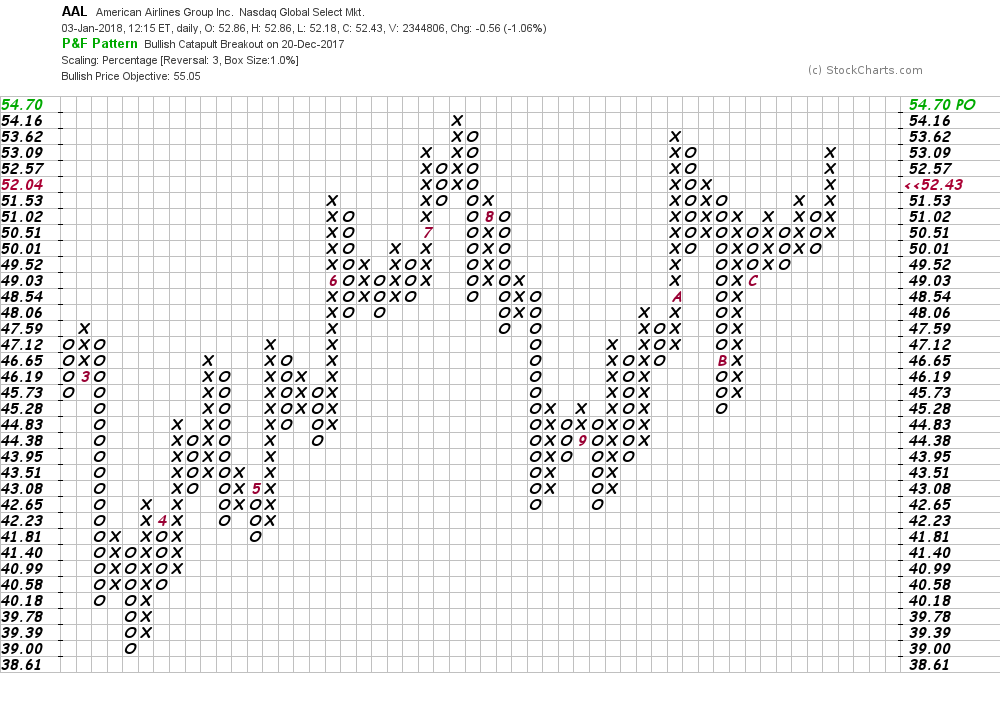 Bottom line: Right now it looks to me that the rally from mid-November is losing lift and that AAL could turn lower. A close above $55 would turn the daily chart bullish but right now I would worry more about the landing than the takeoff.

Read More of Real Money's Stocks You Must Own for 2018:

All Charged Up: Nikola Tries the Upside Again

The shares have rallied in recent days and have almost doubled from November lows.