The airline group has had an amazing run in 2016, no doubt helped by lower fuel prices and consistent (if not growing) demand by consumers and businesses. Most major carriers instituted various fees some years ago for things like food, baggage and other items, which served to boost their bottom line, and as a result their share prices. Many of those policies are here to stay and gave a lift to the entire group. The S&P Transportation ETF (XTN) hit an all-time high just this month after a historic move higher post-election in November.

While it may still be considered a regional carrier, the best-fit name in the entire group might be Alaska Airlines (ALK) . This is one of the most efficient carriers out there with routes to and from the great Northwest, and boasts some of the highest customer service ratings in the industry. But it was the announced acquisition last spring of Virgin America for $2.6 billion in cash that gave this airline a real footprint and a strong competitive advantage.

The airline space is crowded and constantly under pricing pressure, though the many mergers through the years have created somewhat less competition. Nonetheless, the consumer still has choices. The Alaska Airlines Group has expanded routes with the Virgin America merger, and with good pricing, service, low fuel prices and the best on-time arrival rates of any carrier, I believe Alaska is in a position to challenge its bigger rivals like Southwest (LUV) , American (AAL) and United (UAL) .

The chart of Alaska Air is strong and near all-time highs. The weekly chart shows a stock that was strong in 2015 as the entire airline group was leveled. 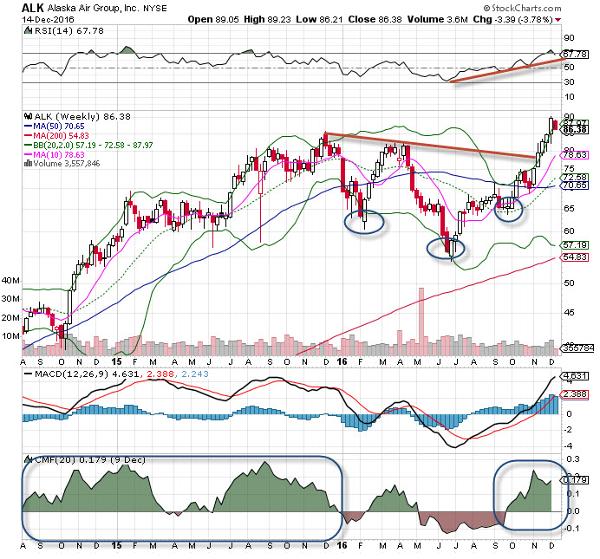 The stock has been overbought for weeks, so that is not a reason to sell. An inverse head/shoulders pattern shows a very powerful bullish trend. Volume has been strong since the summer, so these trends should continue as long as the economy holds up. Money flow has mostly been positive since 2014 and we should see that trend unfold into higher prices in the year ahead.

Get an email alert each time I write an article for Real Money. Click the "+Follow" next to my byline to this article.
TAGS: Investing | U.S. Equity | Transportation | ETFs | Funds | Stocks